The Agostas: How Four People Became a Family 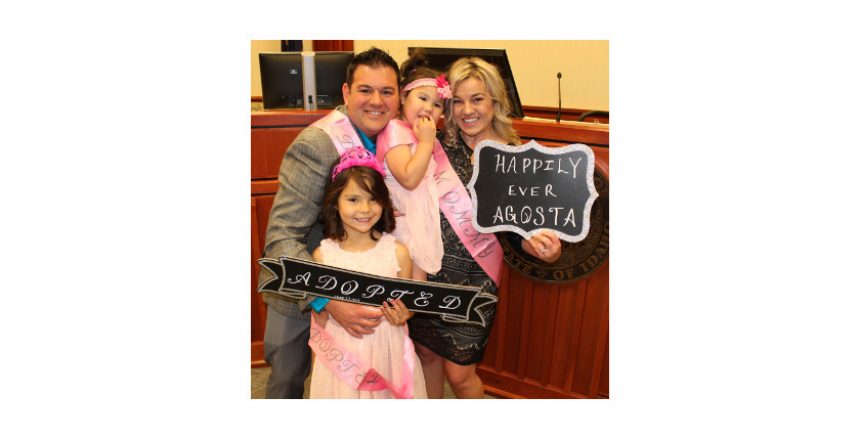 Jeff and Tia Agosta went from being the foster parents of Bella, left, holding the “Adopted” sign, and Nova, being held by Tia, to being the girls’ “forever parents.” Now, the four of them are “Happily Forever Agosta.” (Courtesy photo)

In 2016 Jeff and Tia Agosta went to a party and, as occasionally happens at parties, they gained a new acquaintance. The Agostas didn’t really have a lot in common with their new friend, but they made it work. The Agostas met 4-year-old Arabella, and it was a meeting with a divine purpose.

“Arabella walked by us in a bikini top and shorts, and her diaper was sticking out,” Tia said.

Jeff Agosta is co-founder with Jesse Fadel of a comedy group called Praynksters. The party was a Praynksters event that included a barbecue for the homeless in partnership with Eastwind Community Church, where Jesse is associate pastor. Arabella came with her mother, and it just so happened that  Arabella’s birthday was coming up. Jeff made a video featuring the 4-year-old receiving a gift, and the video became a YouTube hit. Sometime after that, Jeff made another video of Arabella (known as Bella) being taken to Disneyland by the Agostas, courtesy of Dutch Bros. Coffee.

That all amounted to a lot of firsts in a little girl’s life. But the firsts for Bella go even further than that. She had spent her entire life in a homeless shelter. Suddenly, at a special party, she found a sense of security in the Agostas. “We took her to Chuck E. Cheese and the zoo,” Jeff said. “We went through a drive-through, and it was her first time.”

She started spending the night at the Agosta home. “She stayed with us 80 percent of the time,” Jeff said. “She had never lived in a home before, or had a bed.”

Prior to staying with the Agostas, Bella had been surviving on a diet of Mountain Dew and Spicy Cheetos. She wasn’t alone in her struggles — she has a sister named Jenova (known as Nova). Nova was a baby while Bella was enjoying the newness of a home and bed. Nova remained with her mother in a shelter, but the Agostas felt as concerned about her welfare as Bella’s. “I would stop at the shelter to check on her,” Tia said.

The little girls and their mom were staying at City Light for Women and Children. At one point, for the children’s safety, Health & Welfare went into City Light to get the children. The Agostas said it is very rare for H&W to go into a shelter to take children. The girls were given an “emergency placement” with the Agostas, who immediately became their foster parents. Jeff and Tia had not been foster parents before, had not gone through official channels, nor gotten the requisite training. “We were expedited,” Tia said.

In what is known as Fictive Kinship, the Agostas were deemed close enough to the girls to be given care of them as foster parents. They received the required training while they were serving as Bella’s and Nova’s foster mom and dad.

Bella clearly loved her foster parents, and it didn’t take long for Nova to feel right at home with them too. “The baby connected with Tia — she is so attached to Tia,” Jeff said. “God knew that Tia was her mother.”

Ultimately, the birth parents’ rights were terminated, and with breathless speed the Agostas became the adoptive parents of Bella and Nova. “We became a family of four in one day,” they said. The official date was June 27, 2019. It was a Monday and Tia tells how she and Jeff went to Walmart immediately, trying to get all the supplies they needed for the kids. She was even on the phone with her mom, making sure she got everything — all the things that children require 24/7/365.

The Agostas went through a 6-month trial period and went before a committee, part of a stringent process to make sure everything is going to work out in an adoption. But all requirements were met, and the Agostas are comfortable in their new status as parents.

“I truly feel God chose those girls for us. We are four hearts woven together by God,” Tia said.

“There were so many things that had to fall into place,” Jeff said, including his meeting Jesse, co-forming Praynksters, going to a barbecue, and meeting Bella and her birth mom there.

“I still check in on the birth mom to this day,” Tia said. “I want to give Bella a healthy connection to her.”

The Agostas’ road to adoption didn’t come out of the blue; they had frequently talked about adoption during their 12-year marriage. Jeff had cancer as a child and as an adult is not able to be a biological father. He is 36 and Tia is 33. He said that after the kids were adopted, he joked with Tia, “We’re officially adults now.”

Tia was always on board with adoption. “I’ve had a heart for adoption since I was a teen,” she said. “I wanted to adopt my whole class!”

Being adoptive parents isn’t easy — but what parenting is? “You have to be adaptable,” Jeff said.

They deal with the effects that a challenging childhood have had on Bella and Nova. “We take classes in childhood trauma,” Tia said. “I can’t change the beginning of the children’s story, but I sure can change the ending. Forever, this is our family, and family is huge to us.”

They are taking equally good care of their marriage. “We still take vacations alone together; we still need to do that,” Jeff said.

Tia, who worked as a nail tech, accepted a position in late October of 2019 to work with Fostering Idaho as a peer mentor for foster parents. She’s committed to helping others through the experience.

The couple takes their daughters to church, and occasionally the birth mom comes as well. Bella is now 8, and Nova is 3. The Agostas share a story about Nova’s innocent prayers to her heavenly Father. She says: “Once upon a time, there was God. Amen.”

Once upon a time, there were four people living separate lives. Now they’re linked together forever, and God had everything to do with it.

The links to Bella’s videos are https://www.youtube.com/watch?v=UknBxOVvD3c and https://youtu.be/0sshsry04oE. For a link to Boise: The Video Game, a creation of Jeff Agosta, go to http://www.praynksters.com/the-video-games.html.