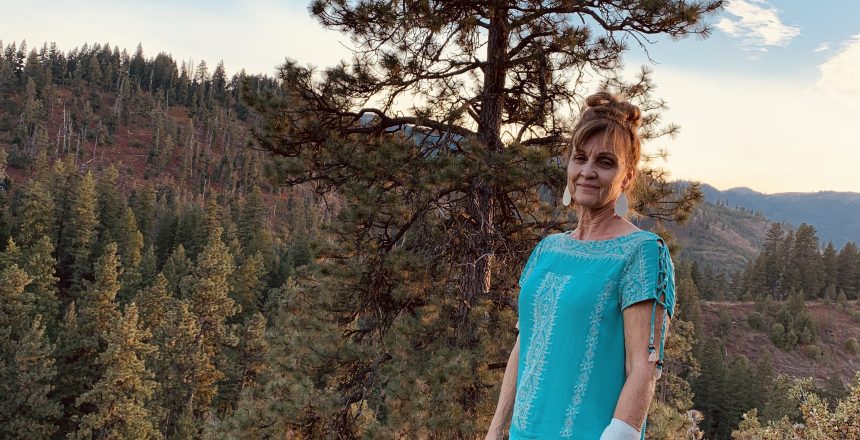 Tonya Holmes was seriously injured by a horse 10 years ago. It was while waiting on a mountainside for medical help that she received a valuable lesson about her salvation. (Courtesy photo)

We went back to the scene of the accident that occurred a decade ago. The hill looks steeper yet. Memories of what happened in 2009 came back….

I remember being thrown over the front of my horse, landing on my back, and seeing the shadow of my horse, Robie, jumping me before both of his hind feet crushed my chest. The impact bounced me onto my hands and knees. I could not breathe. I felt warmth in my chest, and I was very weak. I knew I was going to see my Jesus. My husband, Dennis, was ahead of me, farther down the hill. He didn’t know anything happened until Robie trotted next to his horse without me.

When Dennis got to me, I still had not taken a breath. He grabbed me around the arms and said he would put me on his horse to get me off the hill. The pain was excruciating and made me scream. He quickly laid me back down on my back. That scream got me to take a breath.

Dennis tried his cell phone to get some help. As God would have it, he caught a wave where cell service is not normally possible. However, he lost the connection before completing the call with our location. I told him I was fine. “I am going to be with my Jesus,” I said. Not words of comfort for him. He told me he was headed down the hill to find cell service near the cabin. He threw the reins over Robie’s head and went pell-mell down the side of the mountain on his horse; Robie followed. I felt relieved that he wouldn’t have to watch me die.

I remember a pine tree to my right that was shading my face on that sunny September afternoon. My body kept sliding down the mountain. I couldn’t hold myself on the steep, loose ground. My jacket was slipping up as I slid down. (Later in the hospital, I had thought they had done major surgery when I woke up in ICU; my belly looked like it had been stained with betadine solution, but it turned out I was tan from laying on the mountain.)

The sun was soon beating beyond the branches of that lone pine. I waited for help. I was so very thankful for so many things. Giving God praise for all my wonderful blessings, mostly for letting me die riding horses on this beautiful mountainside with the man I loved. But then I became fearful. I began praying fervently for forgiveness for everything I could think of. During these pleas for forgiveness, I felt the spirit of God in me saying clearly, “Tonya, you know I can’t see your sin!”

I hadn’t been raised to believe this, as I had grown up in a total works-based religion. But lately His Word had been so plain. He died on the cross to forgive me of all my sins — even those I was going to commit in the future. I was no longer a slave to the Law, but free in Christ. Unbelievable! I was overwhelmed with peace.

I didn’t die on that mountain. At the time, I was so disappointed not to go be with my Savior. But He had different plans. I had more work to do for Him here.

As Dennis and our son Ben started up the hill with help, I was able to raise my right hand to wave, indicating I was still with them. As God could only orchestrate, Dennis’s call had alerted — on Labor Day Monday — Cambridge volunteers, a Weiser ambulance, and Life Flight from St. Alphonsus Hospital, not to mention the EMT who happened to be at his cabin next to ours for the weekend.

Ben carried the oxygen tank brought by the Cambridge volunteers up the hill. The EMT stabilized me, and oxygen from the Cambridge volunteers kept me out of shock. We waited for the Weiser ambulance to get meds. The pain was too great to move me to a backboard and down the mountain. They were worried they would lose me to shock if they tried. Life Flight could get as close as three miles to me. Each emergency personnel worked together to get me off that mountain and to the trauma unit in Boise within a few hours of the accident.

My left lung was collapsed and my right one wasn’t working great. My left side was totally collapsed. All ribs on my right side were broken in multiple places. My chest was caved, broken off the sternum on both sides. I had a horseshoe print right over my heart. One broken rib had lacerated my liver.

Before I got off the mountain, people were alerted on Facebook and were praying for me (small town love). My daughter in Salem knew before Dennis got to the hospital in Boise. Praying people changed everything. Miraculously, I was out of ICU in two days and home in nine. I did spend the rest of the year in a hospital bed, but I was so glad to be home. I worked hard to get back on my feet and riding again.

I remember leaving the hospital crying, telling Dennis how sad I was to think I may never ride again. He said just wait to make that call. “Just get better first,” he said. Good call.

I thank God for that accident. His intervention in my life was miraculous. Not only in saving my physical life, but saving me from a marginal Christian life. He has made it rich and full. I never knew it could be so good. Amazing grace, so sweet! A free gift, all I had to do was accept His sacrifice for me. But I added working to be good enough. A requirement He doesn’t want. He just wants my love. There is so much I don’t understand, still, but I trust Him as a mighty God. Not a God who needs my piddling acts to help Him do anything.

As Dennis and I went back to the spot 10 years later, this Labor Day 2019, we thanked God for saving me. We are thankful to still have each other. Things haven’t been easy. God is still teaching us to trust Him. But we can’t think of a better place to hang our hats.