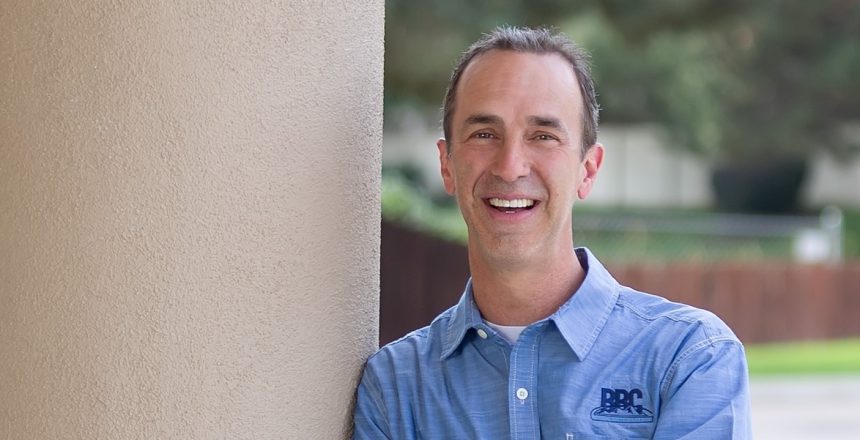 Derek Voorhees was named president of Boise Bible College in 2017. He brought years of education and experience to the position but prefers to lead from a position of humility. (Courtesy photo)

Since 1945 – the same year World War II ended – Boise Bible College has been turning out young people equipped for ministry. Now in 2022, the goal is still the same: to prepare a generation to go out into the world and serve Christ and spread the good news of the gospel.

The BBC campus sits at 8695 W. Marigold St. in Garden City, just west of the Western Idaho Fairgrounds. For the spring semester of 2022, the student body included 92 students. Derek Voorhees, 55, currently serves as the college’s president, having started teaching at the faith-based institution in 2011 and being named head of the school in 2017.

Voorhees still teaches, and his focus is the New Testament. He earned a bachelor’s degree at Ozark Christian College in Joplin, Missouri; a Master of Arts and Master of Divinity at Lincoln Christian University in Lincoln, Illinois; and a Doctor of Ministry at Dallas Theological Seminary in Texas. He chose to major in and teach the New Testament because of his instructors’ influence.

“To better understand the Bible, we need to stand under the Bible, placing the Bible as the authoritative way to understand life. If God created us, maybe we should know how He thinks about everything. The Bible is the truest source.”

An intriguing topic to bring up with Dr. Voorhees is the nature of today’s students: their strengths, weaknesses, and even some of their collective characteristics. On strengths, Voorhees stated: “They’re going to go after it – they want justice, fairness, and equity. They have a lot of ambition for those three things – ambition for good.”

Regarding weaknesses, he explained, “They’re bombarded with so many voices, and they’re trying to figure out which voice they should listen to. They’re learning how to navigate through a sea of voices, in which God often speaks in a whisper. We try to teach them how to ‘tune their ear’ to God’s clarion voice.”

One thing compelling about the current generation, he said, is that more students come from broken families. “That comes with hurt and baggage,” he said, “and we see the results of family breakdown or abuse.”

He conceded the students are a resilient bunch and are “learning grit,” but that “counseling is sought after more than before.”

Today’s current student body has had to deal with a pandemic, a divisive presidential election, tumultuous racial divisions, and gender identity issues, he said. “It’s an interesting generation; they’re very much about justice and advocacy. The school is not against advocacy, but we want them to advocate for things under God’s guidance,” said Voorhees.

If Voorhees has a critique of youth in 2022, it is their tendency to hold very strong opinions and to almost completely reject anyone with an opposing viewpoint. “They will cancel out or negate anyone who doesn’t fit their paradigm. It’s the ‘cancel culture’. We try to teach them that there are a variety of ways we can respectfully disagree with one another.”

Their commitment to serve the Lord is uncompromised, however, and the broad majority of students who attend Boise Bible College want to do something for Jesus, according to Voorhees.

Their primary focus is to serve Jesus through the church. They come to BBC feeling they have a calling but don’t quite know what it might look like and how it will all play out – and that includes students across the board. “They feel they’ve gotten a nudge from the Holy Spirit to come to Boise Bible College and prepare for a ministry. Some of them come from busted, broken families, but they want to serve God.”

Another thing about the current generation, said Voorhees, is that, “The discipline to think well is more rare these days. I’ve noticed that within the last decade or two.” But the college doesn’t give up on its students, and instead, Voorhees stated, “They learn discipline. Our academic rigor is stout, pretty hard.”

One of the most positive aspects of attending and graduating from BBC is the school’s unequivocal outlook that its students not accrue debt like so many others in colleges and universities across the country, amounting to millions in long-term financial obligation. In fact, this past April, American student loan debt was estimated at $1.75 trillion owed by more than 43 million student loan borrowers (information taken from www.NerdWallet.com, with the same results given at https://educationdata.org/student-loan-debt-statistics).

“You can graduate here debt-free,” Voorhees said. But the caveat is that a student has to work at it.

A student must be disciplined to work hard at staying debt-free, working a job while studying, and paying as they go.

What if a student wants to become, say, an architect as opposed to a church youth pastor or other church vocation?

Voorhees answered, “The goal of Boise Bible College is that graduating students advance the gospel, wherever they are. We don’t give them the idea that if you step into the marketplace, you’re ‘less than’. We want the graduates to adopt a life of ministry. We equip them to be a Christian influencer wherever they are, including in the marketplace.”

Voorhees was born in Illinois. He has been married for 33 years, and he and his wife have three adult children; the couple became grandparents of a baby boy last July. All Voorhees’s grown children are in ministry and are spread out across the U.S. Voorhees partly attributes his children’s dispersion to how the family moved around so much during his 24 years serving on church staffs across the country.

Voorhees said he has been well-mentored his entire life: by his parents, professors, and colleagues, including those at BBC. His concept of leadership stems from what he has learned from others, as well as from Scripture. He mentions, for instance, 2 Corinthians 12 and the idea that God kept the Apostle Paul humble through a thorn in the flesh: Therefore, in order to keep me from becoming conceited, I was given a thorn in my flesh, a messenger of Satan, to torment me. Three times I pleaded with the Lord to take it away from me. But he said to me,“My grace is sufficient for you, for my power is made perfect in weakness.”

“There is temptation in leadership or influence,” Voorhees said. “People are tempted to make it about ego, identity, and their value system. So if you’re broken or weak, that’s a good occasion for God to work in us and through us.”

You’ve taken up the cross and carried it daily, as Scripture commends.

Voorhees praised the idea of servant leadership and said he strives to be a servant leader himself: “To have influence from a position of humility, do it in a servant way with an impact that’s big.”