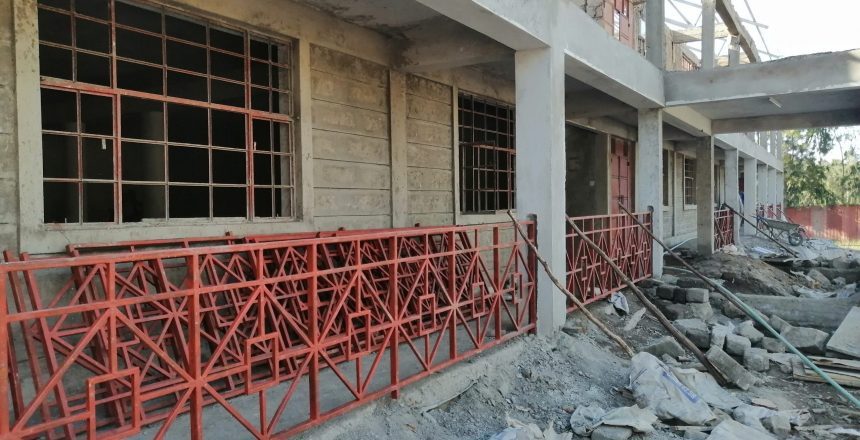 This is a photo of what ultimately became, or will soon become, the boys’ dormitory at Caring Hearts Boys High School in Kenya. The dormitory will house 320 boys when it is fully completed. (Courtesy photo)

Vincent Kituku is a man strongly connected to two countries: his adopted home, the USA, and his native land, Kenya. He has family and commitments in both places and flies frequently back and forth from the States to Africa. At least that was his pre-pandemic routine. For now, he flies across oceans and continents only by Zoom or cell phone; but he has important projects in his homeland that he cannot forsake. He is helping educate children.

More than 10 years ago, Vincent visited Kenya and was deeply troubled by the many young people he saw orphaned by AIDS and struggling to survive on their own. They were not receiving the right kind of help, if any help at all. He could have simply flown back to Boise and forgotten it all, but he soon realized that was not going to be possible for him – the children’s images haunted him and he struggled with the need to help, however he could.

In 2010, he launched Caring Hearts and Hands of Hope from Boise, with the goal of reaching Kenyan children in desperate situations, especially as it concerned helping them receive educations to work their way up from poverty. Then, in 2015, he bought an existing school in Nguluni, Kenya, renamed it Caring Hearts High School, and began educating girls there to give them better lives.

Very recently, he took on the task of building a boys’ school. In 2020, he bought some buildings that were in such poor condition they had been condemned. “The owner of the buildings called me,” Vincent said. “He knew I had an interest.”

Despite the structures’ woeful state of disrepair, Vincent saw some plusses in the buildings and their location. “They are near a major road and a hospital, plus a police station,” he said. They are also quite close to the girls’ school, so he purchased them.

Though Vincent has always worked to help both boys and girls, some may ask why he started with the girls’ school first. He explained: “When we opened the girls’ school, it turned into a protection center, as many of the girls were being abused in some way.”

Girls and boys are treated differently in Kenya, as well as other parts of Africa. The short version of this situation is that boys are treated better. Vincent, who has 3 daughters, as well as a son, doesn’t adhere to the notion that boys always deserve the best and the girls get what’s left. He openly admits that starting the girls’ school first was quite deliberate. Asked if he was trying to make things more fair for the girls, he replied, “I’m not even fair – I give the girls an extra push.”

He regrets that his own mother never got a chance at an education and also said that even in America, with all its opportunities, he has seen his daughters unfairly discriminated against on occasion.

When the novel coronavirus struck Kenya, all the private schools in that country were closed. Vincent said that while the girls were away from the safety of their school, some of them were abused, so school officials brought them back to the school to care for them and keep them safe.

He pointed out that the boys often are ahead of the girls because of this bias. But when the girls are given a fair chance, they often do better than the boys.

Nonetheless, Vincent cares about Kenya’s young males as well and worked to have the boys’ school completed by the end of this March, with the exception of one classroom that needed extra work and was not finished until the close of April. The school was named Caring Hearts Boys High School and is located in Kangundo, very near to Nguluni. Sixty people worked on reconstructing the school, giving them work they wouldn’t have otherwise had due to the pandemic. (Also, teachers were kept on salary at Caring Hearts High School during Covid-caused school shutdowns.)

The whole boys’ school project cost $800,000, including the cost of buying the building, tearing most of it down, and then rebuilding it; 320 boys attend the school and all are orphans, just as in the girls’ school. Along with an education, they will all have 3 good meals a day, every day.

Vincent fundraises in the U.S., and especially in the Treasure Valley. Donors here have been generous. But when he first started his fundraising efforts, he became dispirited. Fundraising took its toll on him, with its constant rejections. Today, he continues his mission with a renewed sense of joy because he sees two essential things differently now.

“When you reach a certain point, you realize you are doing God’s work, and if you ask for money and are rejected, you don’t take it personally. The other thing is that when I started, I was working on expectations,” he said, explaining that initially he only had goals and dreams but nothing concrete to show potential donors.

“But forward 7 years later and we are investing in reality – this is a tested product,” he stated.

There is much evidence that donated funds and everyone’s efforts are paying off.

“It is no longer an expectation,” he said. “We are building success at the school – there is no point in investing if the students are not successful.”

He is proud that some of the students have entered the medical field, and that those who have experienced any measure of success now want to give back to the CHHH program to help others, as they are grateful for the help they have received.

Over the years, 50 donors from this area who gave to the school have been able to visit and see what has transpired from their generosity.

Vincent is currently working toward making both schools self-sustaining. His school projects for Kenya’s kids have been rewarding despite all the effort that has gone into them. But then, Vincent doesn’t see it as his efforts alone. “God has done a lot of work. Not me,” he said.

For more information about the boys’ school project, go to www.caringheartsandhandsofhope.org or email [email protected].