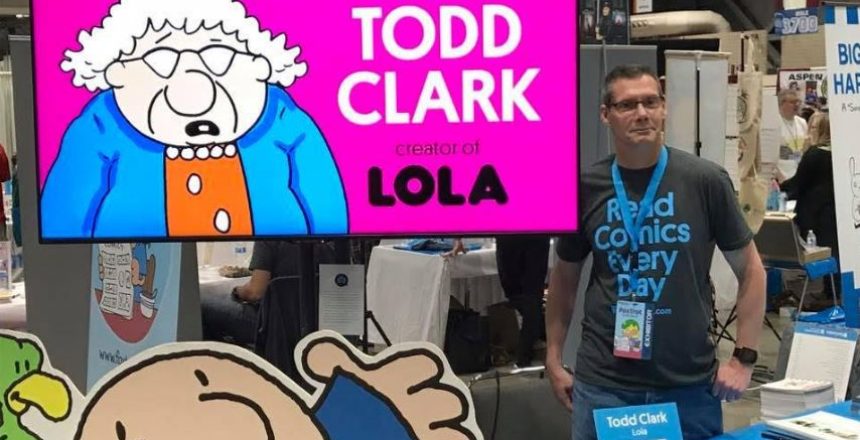 Todd Clark of Boise, creator of the comic strip “Lola”, is shown at a signing event. (Courtesy photo)

Some of us work in large offices … sit in front of multiple computer terminals … and spend our days with co-workers and supervisors.

Todd Clark works alone in his garage studio … sits at his drawing board …and spends his days with friends and relatives of a squatty little beer-drinking grandma who’s not afraid to speak her mind.

That would be “Lola,” the lovable but acerbic title character of Todd’s internationally-syndicated comic strip, which he co-created 21 years ago and still writes and draws today.

Growing up “an Air Force brat,” Todd and his parents lived in Oklahoma, Massachusetts, New Mexico, California, and even Guam, before finally settling in Boise. His late mother, an artist herself, initially taught him to draw. And as far as developing his sense of humor? “Most people my age grew up reading ‘Peanuts,’” he says, “I grew up reading Mad Magazine.”

Now, as an adult, Todd is a strong believer in God – but it wasn’t always that way. “As a child and a teenager, I had always heard and believed that Christ was my savior. But I wasn’t a regular church-goer. I’d go only off and on,” he admits. “Quite honestly, at that point in my life, my faith was secondary to everything else. But then my sister, who attended church regularly, gave me a Bible as a graduation present, when I graduated from Borah High.”

That Bible eventually helped both strengthen and solidify Todd’s faith; so much so, that what had originally been secondary in his life, was now primary. Today, not only are both he and his wife members of a local church, he has a personally-impactful Bible verse posted in his studio. “It’s James 1:17 that reads, ‘Every good and perfect gift is from above, coming down from the Father of the heavenly lights, who does not change like shifting shadows.’ When I read that verse some time ago in a church program, it struck me enough that I cut it out and taped it up where I now see it every day in my office,” he says.

Working under daily deadlines of writing comic-strip “gag” humor – and especially Lola’s droll one-liners – has become second nature for him. In fact, chat with Todd even a few minutes and you’ll realize he talks the same way he writes.

“Yeah, I initially attended Boise State University (majoring in Advertising Design), thinking I was going to be the next Salvador Dali. But that gig didn’t work out, especially when I looked at other artists’ work and thought, ‘Hm. I’m not all that good. Maybe I need to go back to drawing stick figures,’” he wryly says.

But soon, drawing those stick figures – well, okay, maybe a little more than just stick figures – paid off. Todd’s work has since appeared in such publications as The Saturday Evening Post, Disney Adventures and yes, even Mad Magazine.

Todd’s cartooning career kicked into high gear back in 1999, when he co-created “Lola” with fellow comic strip artist Steve Dickenson. “We had worked together on a strip called ‘Tar Pit.’ But when the syndicate dropped it, we wanted to develop another one. So Steve came up with the ‘Lola’ character,” Todd explains, a character inspired by Dickenson’s own aunt who, like her comic-strip counterpart, had been a World War II vet.

Comic strips generally evolve over years, and “Lola” is no exception. “Steve designed the characters and did a lot of the artwork early-on,” says Todd. “When I took it over, I slowly moved it to my own style of art. Plus, today, I don’t think Lola is as gruff as she was in the beginning. Back then, she’d either be drinking a beer or smoking a cigar. Today, I still put a beer in her hand occasionally, but I haven’t drawn her with a cigar in years!”

The strip is distributed by the Andrews McMeel Universal Syndicate to over 100 newspapers worldwide, with an estimated daily readership of 6.5 million. “She’s even carried in one newspaper in Mumbai, India, and a handful of papers in the Fiji Islands,” Todd says.

He points to his family as his greatest personal blessing: his wife, two daughters, and two grandsons. On a professional level, his greatest blessing is “God always being there for me, providing for me; opening doors for almost 30 years now. When one door closed, He opened another. For example, when ‘Tar Pit’ was dropped, we developed ‘Lola,’” he says. “In the beginning, I prayed on it a lot. I asked God, ‘If this is the path I’m supposed to be taking, let me know.’ And He did. It all worked out. I look back on it now and it’s amazing how, as I said, when one door closed, God opened another.”

Starting a new strip – and especially convincing a major syndicate to like it enough to distribute it worldwide – is akin to David going up against Goliath. “It’s an incredibly tough business, especially with the shrinking comics pages,” Todd explains. “What’s more, the odds of  success are stacked against you; syndicates receive like four- to five-thousand submissions per year. And they may accept two.”

Even when a strip is accepted, it becomes survival of the fittest. “When a syndicate takes on a new strip, it means someone else’s gets bumped – their strip gets dropped. Honestly, I didn’t expect ‘Lola’ to last more than two years. And now, here I am, coming up on my 22nd year. So I feel truly blessed that ‘Lola’ has beaten the odds.”

Avid readers will know Todd likes to every so often drop Boise-related mentions into his strip, referencing local TV news anchors, DJs, even names of Boise streets and businesses. “I put Guru Donuts in there a few times, but I still haven’t gotten any free donuts. I’m still waiting on that,” he smiles. There’s that dry humor again.

Even Boise State gets the occasional nod. “If you read the colorized online version, Lola almost always wears a blue-and-orange sweatshirt or sweatpants.” Dropping in subtle local references, “is just something fun I like to do.”

Speaking of which, Todd is one of only a handful of popular comic strip artists – “Peanuts” creator Charles Schulz, “Shoe” creator Jeff McNally and “B.C.” creator Johnny Hart immediately come to mind – who incorporate their faith in God into their work. “Why wouldn’t I?” Todd shrugs. “My faith is a big part of me. It’s not something I want to hide.”

In fact, one of his strip’s recurring “Boise reference” characters is the very wise Pastor John, based on the very wise and now-retired Pastor John Kingrey of the Ten Mile Community Church in south Meridian, a church Todd and his wife used to frequently attend. “Pastor John – the comic strip one –  and Lola have an interesting relationship; he thinks he’s Lola’s moral compass, but I don’t know if she looks at it that way,” Todd points out. Readers will occasionally see Lola kneeling at her bedside saying her prayers or heading off to Sunday morning church – “but if it’s a nice day for golf, she’ll grab her clubs and head out to the course. After all, she has her priorities,” Todd chuckles, tongue firmly in his cheek. “But she also pesters Pastor John with some theological/moral questions.”

Like the panel showing Lola and Pastor John sauntering together along a pathway, engaged in one of Lola’s thoughtful Q&As.

Lola: So Pastor John, you’ll be going to heaven, right?

Pastor John: That’s sure the plan.

Lola: If you get there before me, can you do me a favor?

Lola: Come to the gates and vouch for me.

Pastor John: What if your gates are warm to the touch?

Lola: Then bring me marshmallows.

But just as Lola and the fictitious Pastor John have history, so does Todd and the real Pastor John.  “I’ve known P.J. (as he’s affectionately known by close friends and congregants) for over 20 years. In fact, he baptized me. And I felt sorry for him at the time –” Todd reflects, with another chuckle “ –  “because, when you get baptized, you usually say a few sentences about what the baptism means to you. Then you’re lowered into the water, you come up, and you’re good. But when I got baptized, I rambled on and on for like five minutes about what my baptism meant to me. And P.J. had to stand there and wait for me to finish. But he’s a great guy … with a great sense of humor.”

But P.J. isn’t the only pastor who has impacted Todd’s walk with the Lord. For the past 12 years, Todd and his family have been members of their now “home church,” the Cloverdale Church of God in west Boise, and have become close friends with Pastor Tom Dougherty there. “He conducted the marriage ceremony for my oldest daughter … and I’ve even been on his radio show a few times!” Todd says. “Pastor Tom’s great; he’s very relatable, genuine … and I love his sermons! They always strengthen my faith.”

But even those living strong in their faith experience their darkest hour. For Todd, it was when “my mother suddenly passed away at age 67 from congestive heart failure. She had had other health issues –  and then, when her appendix burst, my wife and I got a call from her doctor telling us she had only a day or two to live. So we spent the last hours with her at the hospital. Coincidentally, Mom died three months to the day after one of my daughters was born. We only have one picture of my mother holding my daughter as an infant. Had we known Mom was going to pass so suddenly, we certainly would have taken more. In addition, Mom had a great artistic talent … and now, my daughter is very artsy herself. It really crushes me that they were never able to know each other. I’m sure, if Mom had lived longer, they would have had a great relationship.”

But Todd likes to stay focused on the future.

Which brings us to the question: So what’s down the road for “Lola”? “A friend and I have written a ‘Lola’ Christmas special that we’ve shopped around. Plus, there’s been interest in a possible ‘Lola’ TV show, but nothing’s panned out yet,” he replies.

And as far as his own future, he says, “I’ll go wherever the Lord leads me.” Todd recently finished work on a screenplay for an animated television special with his friend – and hero – “Berke” Breathed, creator of the long-running Bloom County comic strip.

But his “huge passion”, as Todd puts it, is writing. He already has a number of books to his credit: several “Lola” books (a compilation of strips) and the children’s release The Ice Cream Kid: Brain Freeze!, which he also illustrated. “But I’d like to someday write books, be a writer, an author,” he says. “I’d like to be able to develop characters, more than I can now in the standard three-box set-up/set-up/joke comic strip format. I’ve had some interest from publishers … so who knows?” Today, given his faith, his loving family, a successful career, an internationally-read comic strip that beat impossible odds, a bright future, and the opportunity to work from home at his dream job, Todd Clark humbly sums up his life with: “I’m just a guy in his garage … who’s been very, very blessed.”