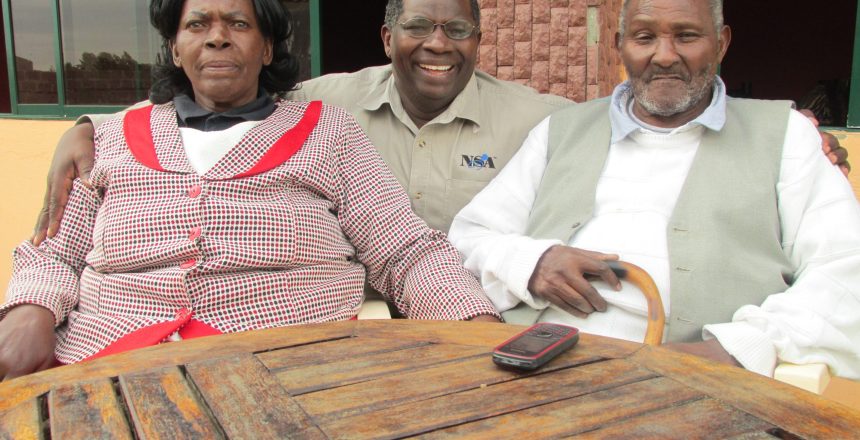 Vincent Kituku, founder of Caring Hearts and Hands of Hope, is shown with his parents in Kenya. His mother is Margarita Kasiva Kituku, and his father is Johnson Kituku. The senior Kituku passed away earlier this year. (Courtesy photo)

My father, Johnson Kituku, was forced to drop out of school in second grade after his mother died so that he could take care of his two young siblings, a brother and sister. He later joined Kings African Rifles (KAR) when Kenya was still colonized by the British. He left the military soon after the country became independent in 1963.

We lived in a two-bedroom mud structure (one bedroom for my parents and one for my two sisters) that had a living space as well as a cooking place. That living space sheltered goats and chickens at night. It was also where the bed of us five boys was. I recall many nights when my parents would let mentally ill people come spend nights with us, especially when it was raining. We also shared whatever little we had for dinner with them.

I was in class six when I learned that one of my classmates was orphaned. He slept anywhere he could find. I brought him to my parents and told them about his vulnerability. My dad and mom took that boy as their own son. They not only fed and clothed him but also paid his tuition until he graduated from high school and joined the army.

My father believed in the power of education more than any other person that I have ever met. Space and time limit what I can write about the most intelligent second grade dropout that I have ever known. He encouraged us with both rewards and spanking. He spanked me for being in position six in a class of 120 pupils. When he sensed that I might wait for some time before starting a Ph.D. program after I graduated with a master’s degree, he wrote me a six-page letter on the importance of obtaining a doctorate degree.

One of his life’s highlights was my involvement in not only educating my own family members (and my in-law’s families) but also other vulnerable children. On January 24, 2013 at a gathering with guardians and the students we were sponsoring, my dad said, “My son is doing what God created him to do.” Then he shared the story of my youth. How I brought an orphaned boy home for him to be helped. That statement was so empowering that three months later, I started working full time on this mission, even without pay.

My dad died on May 16. I had gone to Kenya for our mission’s work without knowledge of his terminal illness. In God’s plans there are no coincidences. I was able to organize and coordinate a befitting farewell service that was attended by more than 2,000 people. His last public appearance was in July 2021 when he blessed our boys’ school and had lunch in the dormitory that is named in his honor.

Caring Hearts and Hands of Hope is today transforming lives because a caring second grade dropout valued education. The impact of his passion and kindness could not have been foretold, just as the generosity of our supporters will ripple throughout time.

To learn more about Caring Hearts and Hands of Hope and how you can help, visit www.caringheartsandhandsofhope.org or contact me at [email protected].