The Gift – Sadie: Little Bundle of Love and Blessings 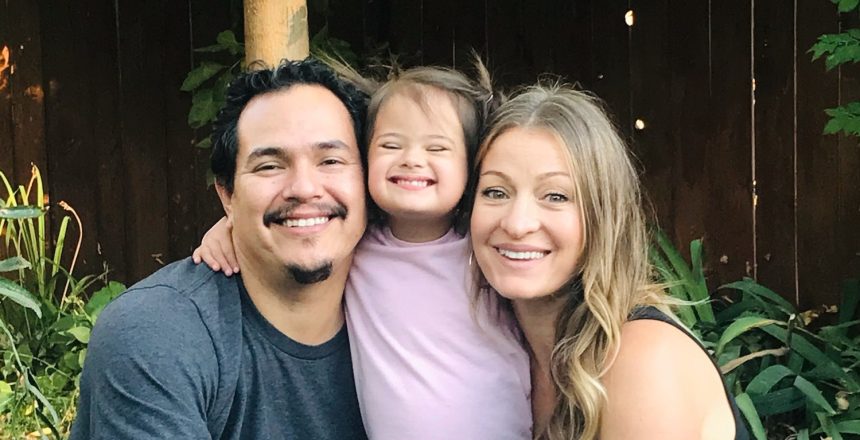 Frankie, Sadie, and Steffanie Larriba (left to right) are a Boise family on a mission to educate the world about the blessings of having a child with Down syndrome. (Courtesy photo)

Imagine opening a tiny package and seeing inside of it the biggest blessing you’ve ever been given – and it’s not even Christmas yet. When Frankie and Steffanie Larriba of Boise learned they were going to be parents, they experienced the general euphoria of expecting a child. But they were as yet unaware of what a gift they were truly getting.

“We opted out of genetic testing,” said Steffanie.

Prenatal testing gives expectant parents information about whether their fetus has certain genetic disorders. Steffanie and Frankie were certain that no matter what a test said about the wellness of their coming baby, it would make no difference. They were going ahead with the pregnancy under any circumstances.

The baby girl they named Sadie was born January 3, 2018. As it turned out, the Larribas’ beautiful newborn came into the world with an extra chromosome 21. In other words, she is a child with Down syndrome. There were some initial fears that needed to be allayed. “I was scared for Sadie,” said Steffanie, “about how people might treat her.”

Also, roughly 50% of babies with Down syndrome have heart conditions, so Steffanie prayed to God, “Please do not let her suffer.” But little Sadie took all the required post-delivery tests, and everything turned out fine.

Now 45, Steffanie was 42 when Sadie was born and had experienced a previous miscarriage. She went through a significant wait before she became a mother, but she definitely feels the delay was worth the benefits.

“Sadie is everything I could ever ask for in a child – and more. I feel God created her just for me; she’s healed me. She has brought healing to our whole family and has changed all of us for the better. I didn’t have the best childhood, and God knew my heart needed a lot of healing. He used Sadie to do that. She is the most incredible gift,” said Steffanie.

Sadie, at 3, knows sign language as well as spoken words, and one day her mom smelled her hair and said, “I’ll bet this is what heaven smells like.” Then she asked Sadie, “Did you come from heaven?”

Sadie answered no, so then her mom asked, “Where did you come from?” And in both sign language and verbally, Sadie replied, “Jesus.” When Steffanie asked her why she came from Jesus, Sadie answered with one word: “Mom.”

Steffanie asked, “You came just for me?” and Sadie said out loud, “Yep!”

Sadie seems to bless more than just her mother and father. “Everywhere we go, she changes  somebody in some way. At church on Sunday, she walks up to different people and hugs them. My husband feels she knows who needs a hug.”

Her mother explained that one time Sadie walked up to a stern-faced man and gave him a big grin. He immediately broke out in a smile and got a hug from her.

One of the family’s biggest emphasis, and most important missions, is to educate others – including expectant parents – about children with Down syndrome. Sadie herself plays a big role in that. “She changes people’s notions of Down syndrome a lot,” said her mom. “My goal is to show the world that kids with Down syndrome are a gift. The preconceived notion is that they’re ‘less than’ – not as smart or able as other children.”

Steffanie, who studies the topic at length, said that as recently as 30 years ago, people with Down syndrome were institutionalized and referred to as “mongoloid.”

Steffanie was troubled when she attempted to research Down syndrome on Google. A photo came up of a child with its eyes crossed and its tongue hanging out, and the entry on Google included scary scenarios, such as a child with Down syndrome may never walk or see, painting the darkest of pictures.

Anyone deliberately trying to find harsh facts about Down syndrome on Google will definitely succeed. For instance, here are some sources that came up during a recent search (none of the sources were in favor of the information they supplied):

Steffanie feels the Lord opened doors through Sadie to be able to give the world the important message: “These kids are worthy.”

She’s written a book titled, “He Gave Them Something Extra.” Illustrated by Leah Riley, one of the boldest messages in the book is that God does not make mistakes – and that remains the truth with kids with an extra chromosome 21, the ‘something extra’ in the book’s title. Following is a brief excerpt:

He gave them something extra,

He knew right from the start,

that He would send these precious ones

to show the world His heart.

Steffanie spoke early in 2021 to members of the Idaho Legislature in an effort to inform them and push for Down syndrome legislation that protects children and educates mothers. Her speech included the following statement:

“We knew Sadie had a special mission when she was born and, wow, has it given us some special opportunities to fight for kiddos like her! Would I have chosen Down syndrome before Sadie was born? No. Would I choose it now that I know better? 100% yes! What an honor to speak at the Capital of our state today to fight for a bill to educate expecting mothers about Down syndrome.”

She wants to give women better and more current information to help them make more informed choices, to let them know that help is available, and that children with Down syndrome are not doomed to a dismal life of inadequacy where they are not happy and where they make no contribution to the world they live in.

Steffanie said Sadie is a bit slower with language than other children, and some pretty ordinary skills can sometimes take her longer to learn (“I worked with her on jumping for six months”), but the world is really wide open to her in so many ways.

She takes speech and physical therapy and has the unconditional love and backing of both her parents. Steffanie said that not only did God give her and Frankie the right baby, but He also gave Sadie the right parents – they’ve been completely devoted to her. Of her husband, Steffanie said: “He’s the best dad and the best husband. He never knew he could love a little girl like that. She’s got him wrapped around her finger. She’s the star of the family. We don’t ever hold her back, we tell her she can do it.”

As for how she mothers the little girl with Down syndrome, she said: “I never treated her any different than I would treat any other child. I have had to be her main advocate. My goal is to give her the best chance she can have for her life.”

She also loves books. “Her favorite thing is books. I started reading her books when she was 2 years old.”

Along with helping moms and dads make informed choices when told their child has Down syndrome, Steffanie wants to go even further, seeking to help them realize that having a Down syndrome child is a blessing. The world is open to them as it is to everyone else – and they give back as well.

“There is a model with Down syndrome in Australia, and they are actors, and they go to college,” she said.

Never to be ignored is how their heavenly Father feels about them. “They are true gifts from Him that teach us valuable lessons,” Steffanie said.

“Before I formed you in the womb I knew you, before you were born I set you apart.” – Jeremiah 1:5