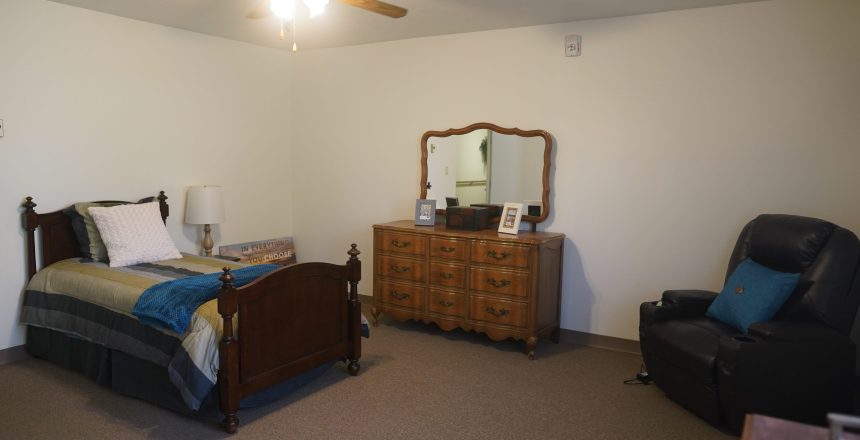 Sonrise Manor will soon offer fully furnished units to people in need of transitional housing. Much like a new subdivision has model homes open to show potential buyers, Sonrise Manor is currently displaying model bedrooms like the one above for investors to tour. (Photo provided by Boise Rescue Mission)

“Raising a 10-year-old daughter and a 16-year-old son as a single mom was pretty difficult, and, honestly, I was overwhelmed. It was impossible to keep up with our bills on my wages … I didn’t know how to handle it alone,” says Jessica.

“But being able to move my family into Sonrise Manor has been incredible. It’s not just about saving money. What is important is that we are surrounded by support. I feel safe here. We come home at night, and there are other people around. We sit, eat together, and share our day. We check in on each other and laugh a lot!” she excitedly points out. “The whole environment is very uplifting! It feels like family and, right now, that is exactly what we need. I’m so grateful to have this time to get our feet back under us.”

Jessica’s story is not unlike others in the Treasure Valley who have been homeless, living in temporary shelters, or struggling to make ends meet – not to mention possibly even raising kids along the way.

We say “soon-to-be-newest” because the building has not yet officially opened for guests. And may not until spring of next year, according to Boise Rescue Mission Ministries CEO Rev. Bill Roscoe.

For many years, the facility at 1777 S. Curtis Road in Boise had been an assisted living center. Its owners, a couple with longstanding ties to the Rescue Mission, “reached out to us recently, to see if we would be interested in perhaps purchasing the property,” Roscoe explains. And God’s timing was perfect. Because, when they made the offer, the couple wasn’t aware that the Mission had been fervently praying and looking for some time for ways to improve housing opportunities for its New Life (drug and alcohol recovery) Program graduates.

“It’s become very, very, very hard for people coming out of our shelters to get back into the community. In fact, anyone who is looking for housing in the Treasure Valley right now knows there’s a very short supply and very high costs involved,” Roscoe says. “For every house or apartment that becomes available to rent, there are usually ten to fifteen people immediately waiting in line. Landlords’ first choices, of course, are those with great work and great credit histories who have money in the bank and can pay the first and last month’s rent. For those who have been living in a homeless shelter who may have a credit problem or a criminal record, well, those are big negative deterrents to a landlord – and makes those folks the least likely candidates to get a rental unit.”

So, after several walk-throughs of the facility, meetings with Board members, and crunching the numbers to see if such a move would even be financially feasible, the Rescue Mission purchased the property for the agreed-upon price of $3.5 million.

“When I first saw it, I was overwhelmed. I thought: Wow! What a great piece of property!” Roscoe recalls. “It has a gorgeous setting … huge beautiful trees … a large recreation area with a fireplace. In all, it’s a huge 55,000 square foot building on almost four acres.”

With, most importantly, plenty of rooms that will soon be converted into private transitional housing units.

The Mission’s original goal was to raise money and pay off the mortgage within two years. But as word of mouth spread about the project, people quickly reached into their pocketbooks. “For example, three people I shared this vision with all made huge and unbelievable financial contributions,” Roscoe said. In fact, so many donations poured in that Mission officials were able to pay off the mortgage last March, far earlier than anticipated. “So we now own the building free and clear!” he stated.

And even though God spiritually opened doors to help the deal come together and the mortgage get paid off early, Rescue Mission officials knew there would be a lot of renovation – a lot – that needed to be done before the doors could physically open.

So a capital fundraising campaign was launched to help raise $2 million for renovation, and almost $1.7 million to operate the facility for the first three years. Roscoe says about 75% of that goal has been raised thus far through pledges, donations, and financial gifts.

“There is extensive work that needs to be done on the heating, cooling, ventilating, plumbing, and electrical systems; in fact, the third largest part of the remodel will be electrical,” he explains. So, with fundraising in high gear, the Mission is now in the process of getting all the proper paperwork, bids, appliances, furnishings, and contractors and engineers (many who are donating their time) lined up so that the facility can open, Roscoe hopes, sometime next spring. But supply chain issues have held up some of the work. “In September, we had 41 new toilets delivered – that we had ordered back in February,” he said. “We also ordered 115 heating and cooling units, since we’re going to have individual heating and cooking units in every apartment. But delivery on those is six to fourteen weeks out.”

As the preliminary work continues, several guests have already moved in. Or, as Roscoe explains, “After we closed escrow, we wanted to have a continual presence on the property, especially to protect our investment and prevent any vandalism or trespassing. So we moved thirteen people onto the property (including Jessica and her two children, the woman quoted at the beginning of this article) –  people who were, like Jessica, graduates of our New Life Program and needed to stay in transitional housing … as well as people who are employees of the Mission.” All are currently living in the most recently-constructed wing of the facility, which officials say will only require a small amount of future remodeling.

When completed, the facility will offer its guests sixty completely furnished studio, two-bedroom, and three-bedroom apartments, a commercial kitchen (which will serve daily hot breakfasts and dinners – and sack lunches by order, for those who are employed off-site), a large dining area, four full laundry rooms, and a 24-hour staff including case managers and maintenance workers. Unlike other Mission facilities, Sonrise Manor will be designed for individuals, single parents, and families. Maximum capacity will be about 100 people. Once it officially opens, the center will not require residents to pay rent; instead, they’ll pay what’s called a ‘program fee’ based on their financial abilities. In fact, this is the only program the Rescue Mission offers that will require participants to pay a fee – because, not only will the transitional housing residents be gainfully employed, part of their educational program is to learn how to balance their budgets and manage their money. Plus, paying the fee allows them to save the majority of their income so they can eventually move out of transitional housing and afford their own place. “Which is our ultimate goal,” Roscoe adds.

Men, women, single parents with their children, or even families who are staying at any of the Mission’s other temporary shelters or transitional housing units in the area can apply to stay at the Sonrise apartments. Directors will review the applications and determine the best candidates willing and able to make the move both into – and eventually, out of – the transitional housing program. How long they stay will be determined by their own needs and successes. Some may stay for weeks, some for months. And some, because it may be difficult for them to get into independent living situations due to their age or health conditions, may stay for years.

Roscoe proudly points out, “We’re very unique. In fact, I don’t know of any other agency or ministry in the Treasure Valley that has a program quite like this one. Of course, we’re also unique – and we make no bones about it – in that we are a Christian transitional housing community. The folks who will be living there will be people of  faith. We’re going to have Bible studies, mandatory chapel assemblies, monthly devotional group meetings, and the like.”

And, of course, the name underscores both the hope it gives its residents and the center’s rock-solid Christian foundation. “We chose the name Sonrise Manor … to symbolize the dawn for formerly homeless residents seeking a fresh beginning toward independent living with a renewed relationship with Jesus Christ,” he added.

Much like a new subdivision has model homes for potential buyers to tour, Sonrise Manor has several completely furnished model apartments (pictured) for potential investors to tour.

If you’d like to make a donation to the Boise Rescue Mission’s capital fundraising campaign for the renovation of Sonrise Manor … or want to learn how you can “adopt a room” in the facility … you’re encouraged to call the Rescue Mission’s main office at (208) 343-2389 or check out its website, https://boiserm.org/sonrise-transitional-living/

Steve Bertel is a multi-award-winning professional radio, television, print media, and social media journalist, who recently retired after a 30-year broadcasting career. Now a busy free-lance writer, he recently released his debut suspense novel “Dolphins of an Unjust Sea”, available on both Amazon and Kindle. Steve and his wife of 40 years live in Meridian, Idaho. He can be reached at [email protected].