Rising on the Wings – Boise Airport Chapel Ministers to Many 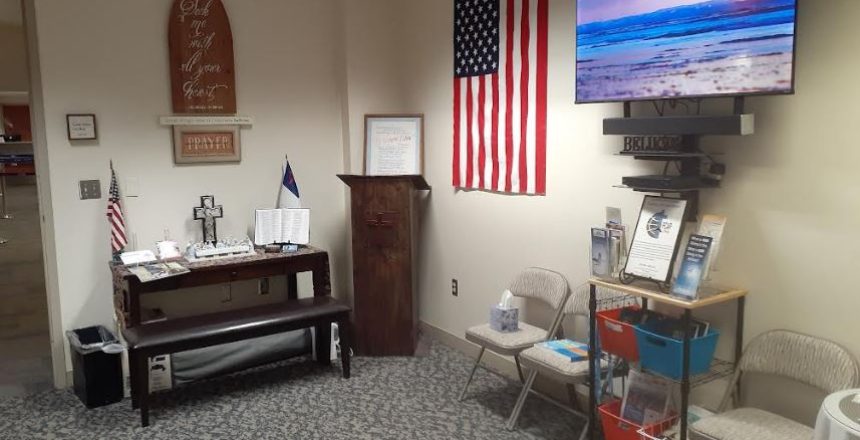 The Chapel at the Boise Airport. (Photo by Steve Bertel)

“I was really hurting. … struggling inside. I felt like a failure. I wanted to give up my life. I wanted to commit suicide. … In fact, I was thinking about it. A lot,” the woman says.

She sits in front a video camera, addressing an off-screen interviewer. Soft-spoken, but her words are coming hard. For privacy reasons, we don’t know her last name or her background. We know only that she’s young, attractive …

And that her life was in turmoil. “People look at you and you have a smile. But they don’t know who you are inside. Or what troubles you,” she says.

Fortunately, the woman’s life recently changed for the better when she walked through a certain chapel door. “When I first walked in, it was quiet. The pastor was there to greet me. And I felt a quiet grace … and love. (At that particular time in my life), I felt lost and alone. So I needed that love. I really needed that.”

But this isn’t just any chapel she’s talking about.

This chapel is an unobtrusive little room, some 10 x 18 feet … tucked away between the Avis and Dollar Rent-a-Car customer service counters on the lower level of the Boise Airport.

The woman is one of countless people who have come through the doors of the chapel looking for solace, peace, or simply wanting to spend a quiet moment or two with God … and finding an understanding pastor graciously willing to sit down, talk, and pray with them.

For the past 15 years, that understanding pastor has been Warren Milanowski – “Ski”, to his friends – a man well familiar with the often-fast-paced airport and travel environments. He worked for Delta Airlines for 39 years and the Transportation Security Administration (TSA) for another five. Then, shortly after he retired in 2002, he attended Workplace Ministry Training at the Fellowship of Christian Airline Personnel (FCAP) headquarters in Fayetteville, Georgia. Founded in the early-’70s, FCAP is national non-profit group encouraging Christians in the airlines/aviation industry to help use their unique workplace as a mission field.

Eighteen months later, after achieving Field Staff status with the organization, “ … God started me thinking about doing something else with my life,” Milanowski recalls. “I really believe He laid it on my heart to start the chapel.” So he discussed the plans with his pastor at the time, Orvil Stiles of Second Baptist Church in Boise (now Summit Church). And, as Milanowski puts it, “He actually said, ‘You need to have a chapel in the Airport and you need to be the chaplain.’ At first, I resisted that idea because I didn’t have any formal training – I didn’t finish college. But then, I started talking with businessmen and pastors who were involved in other local ministries and got very positive feedback.”

On August 1, 2007, the chapel opened its doors, backed with support from FCAP, various funding avenues and, of course, Boise Airport administrators.

Today, as the Airport’s chaplain, Milanowski is quick to point out that, “A lot of people, especially those coming here from the West Coast, are very surprised to see not only a chapel at the airport –  although the Portland and Seattle airports both have chapels – but to come in and see one that’s obviously Christian. We’re unique in that sense. Plus, some of the other airport chapels in the country are pretty stark; there’s nothing to indicate any particular faith.”

Though primarily Christian, the chapel is officially interfaith/non-denominational, evidenced by the Book of Mormon and the Koran also being available among all of its Christian-based literature. The chapel is open to – and used by – people of all faiths; even Muslim travelers have been known to come in, roll out their prayer rugs, and pray facing Mecca. “We welcome everybody,” Milanowski states. “We’re happy to have conversations with anyone, believers and non-believers.”

Entering the chapel, one immediately senses the combined quietness of a reading room and the tranquility of a doctor’s office lobby: comfortable chairs, bookcases filled with life-affirming reading materials, a video monitor offering an array of serene scenes … along with, of course, a Ten Commandments tapestry, open Bibles, Our Daily Bread devotionals, a figurine display depicting the Last Supper, and an apropos wall poster that reminds everyone of Psalm 139:9-10, “If I rise on the wings of the dawn, if I settle on the far side of the sea, even there your hand will guide me, your right hand will hold me fast.” “I like those verses because, reading the term ‘wings of the dawn’, you could picture an airplane … and as for ‘if I settle on the far side of the sea’, well, people could leave Boise in the morning and be on the opposite side of the world in a day or less. So it’s a good reminder that God is with them, wherever they go,” Milanowski points out.

In fact, one traveler commented, “Every time I come to Boise, I come to this chapel to grieve and celebrate. I’m so grateful for your prayers. You have gotten me through so much.” Another added, “The first time I walked (into the chapel), I felt somebody patting me on the back, going ‘I’m glad you came in.’ And it was Jesus.” And still another was grateful for “… the beauty and peaceful feeling in this place. Surely it is Holy ground.”

Over the years since the chapel first opened, the Airport has been under the leadership of three directors and two interim directors. And, as Milanowski emphasizes, “We’ve been really blessed in that we have not had any negative input from any of the airport administrators about what we do in the chapel. We’ve had no push-back at all.”

Boise Airport Communication and Marketing Manager Shawna Samuelson is quick to “sing the praises”, as she put it, of the Airport’s chapel. “We value their partnership and greatly appreciate the support they provide passengers, employees and tenants. The chapel has assisted those impacted by illness and has been supportive of employees who have experienced financial hardships – including during the 2018 federal government shutdown when employees at the TSA and FAA were not paid for multiple pay periods, and the chapel was able to help provide assistance to those who needed it,” she points out.

Working with the United Way and the Boise Police Department (which has a security office at the terminal), the chapel also provides emergency items – gift cards, personal care items, and the like – for travelers in need, particularly those who find themselves stranded at the Airport due to long layovers or cancelled flights. They even recently helped a woman and her several children who were escaping an abusive relationship. “She had missed her flight. She had no money, no one to call, so we helped her out,” Milanowski says.

The chapel itself is open 24/7. But it’s not always staffed. Milanowski works three days a week, roughly six hours a day (from about 9 a.m. to 3 p.m.); his six-year chapel partner, retired pastor and fellow Airport Chaplain Doug Human, fills in other hours, as do a handful of volunteers. The chapel is also staffed for a short time every Sunday morning, for focused prayer time. “On those days, the Airport (administration) allows us to make PA announcements to everyone in the building, inviting them to come,” Milanowski says.

Of course, as the Treasure Valley grows, so does the Boise Airport. Currently, some 4,000 people work at the terminal, including those employed by airlines, car rental agencies, concessions, parking providers, and the TSA. What’s more, the Airport sees about 10,000 passengers arriving and departing each day – jumping to some 12,000 during peak travel seasons. So that means a lot of people to minister to.

But Milanowski is not content with simply sitting in the chapel, reading his Bible, and hoping someone will eventually walk in, especially since the chapel is sort of off the beaten path. So, for about two hours every shift, he and other chapel volunteers – each wearing their authorized Airport ID and a big yellow button that reads “Need Prayer? Ask Me” – simply stroll through the concourse, the baggage claim area, employee break rooms, and even outside where taxis are waiting to pick up passengers, casually approaching those who appear to be in need, be they travelers, flight crews, or airport personnel. “We don’t interrupt workers who are in the middle of their jobs, of course, but we walk around talking with folks, encouraging them, passing out Scriptures (for those willing to take one), even praying with them on occasion,” Milanowski explains.

The chapel team also hosts annual barbeques or breakfasts specifically for airport workers “… which gives us more of a chance to meet with and build relationships with them,” he points out. But working in a fast-paced, ever-changing travel environment like the Boise Airport – where most of the people you see are striding along, pulling their spinner luggage behind them – often makes it difficult to establish long-term relationships, especially with new believers. Shifts change every six months, workers transfer, retire, move on. So regretfully, Milanowski says, “We sometimes don’t get a chance to disciple with them over time as much as we would like.”

The chapel receives no government or airport funds; it’s entirely supported by donations from the Boise community and local churches, including Boise’s Summit Church, the Cloverdale Church of God, and the Eagle Nazarene Church, among others. Additional grant money has come from the Harold E. and Phyllis S. Thomas Foundation, established in 1995 by Harold Thomas, a Christian businessman and former CEO of Trus Joist International, a billion-dollar engineering and manufacturing firm headquartered in Boise. The Foundation awards grants for Christian evangelical work. “They’ve really been instrumental in keeping the chapel open,” Milanowski points out.

Today, at 79, Milanowski has no immediate plans to slow down. But he’s been entertaining the idea. “I know there will come a time when I’ll have to retire – again,” he says. “So I’ve really been praying about it. And while I’m letting God decide the timing of that, I realize the wisdom of having someone lined up if something would happen that would cause me to be unable to continue. As for now, though, I have no sense of God saying it is time to leave the ministry.”

You can learn more about the chapel … and watch the video testimony of the woman we profiled at the beginning of this article … at its website: https://boiseairportchapel.org. Or, if you feel led by the Lord to volunteer your time and ministerial talents at the chapel, you can contact Milanowski at (208) 371-8569 or at [email protected].

Steve Bertel is a multi-award-winning professional radio, television, print media, and social media journalist who recently retired after a 30-year broadcasting career. Now a busy freelance writer, he recently released his debut suspense novel “Dolphins of an Unjust Sea”, available on both Amazon and Kindle. Steve and his wife of 40 years live in Meridian, Idaho. He can be reached at [email protected].