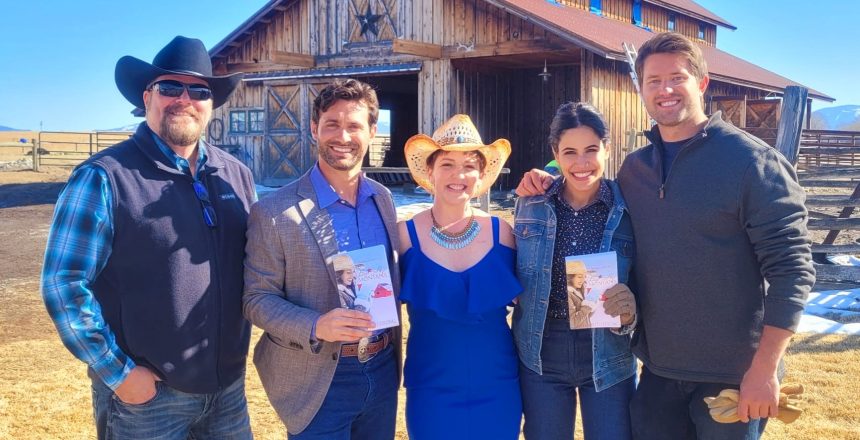 Angela Ruth Strong (center, in cowboy hat) is shown here with, left to right, her husband Jim Strong and actors Jonathan Stoddard, Hedy Nasser, and Nathan Kehn. The actors were all cast members in a movie made from one of Strong’s books. (Courtesy photo)

On the first day of my chemotherapy, I just wanted to go home and watch a feel-good movie to take my mind off my own troubles. One year later, I was an extra on the set of a feel-good movie I’d written. This month, I get to premiere that movie in Boise to raise money for fighting cancer.

I hope you’ll join me at Overland Park Cinemas at 7 p.m. on September 9 to watch my dream come true. This is your chance to see a theater screening of Finding Love in Big Sky, based on my book by the same name. Tickets are $9, and 100% of ticket cost will be donated to Camp Rainbow Gold for supporting children who are fighting cancer.

I’m looking forward to hosting the event with a red carpet, photo ops, live music, giveaways, and book-signing. This film has been a long time in the making. It started with my debut novel back in 2010.

Love Finds You in Sun Valley was a part of a Christian series written by a variety of authors. Though nobody knew who I was, my book got swept away in the current of readers who’d picked up all the books in the line. It was sold at the airport, Walmart, and Costco. It had a hardback edition. It was even optioned for film.

This was a great way to start a writing career, but it was also a tough time for the publishing industry. Books were going digital and bookstores were closing. My publishing company shut down and my novel went out of print. On top of that, my marriage ended, and I didn’t want to write romance anymore. Thus I split ways with my agent. My book was dead, dead, dead.

But then God did what He wants to do for all of us. He redeemed me. As an encore, He brought my book back to life.

First of all, I met Mr. Jim Strong, who proposed at Overland Park Cinema, the very cinema where my movie will be shown. Through my second chance at romance, I learned what true love is, and there is nothing else I’d rather write about. Secondly, God opened the door with a new publisher who rereleased the book as the first in the Resort to Love Series as well as a producer who optioned one of the sequels.

The book Finding Love in Big Sky released in 2016. With every year that passed, I figured the chance of my book actually getting made into a movie was growing slimmer and slimmer. I went through my battle with breast cancer then COVID-19 happened. When I found out my producer’s husband had also been diagnosed with cancer, I didn’t even consider production a possibility anymore.

Imagine my surprise when I got the call from my publisher while in line at Walmart last spring. “They start filming tomorrow,” she said.

I ran home to tell my husband, and we drove up to Montana to dance in the cowboy ball. We watched both kisses and the mentor scene be filmed, and though Jim didn’t get to play an extra in the mechanic shop the way he’d wanted, the actress who plays the mechanic calls out to a “Jim” in his honor. The actors all made us feel like VIPs, and we went to breakfast with the director and cinematographer on the last day. It was everything I dreamed it would be.

Now as my movie is about to release, my producer’s husband is recovering from his cancer. This season of life has been hard for many people for many reasons, but through it, we’ve seen God work miracles, and we want to share our blessing with others. I selected Camp Rainbow Gold because the heroine in the movie is also raising money for a camp, and I’ve been working on a picture book about childhood cancer.

Like all good book/movie characters, we are each going to go through dark times. We will experience pain. But our challenges give us opportunities to grow, along with personal stories of overcoming to share.

Let’s fight our battles together. And let’s always remember that we serve a God who is in the business of redemption.

To order movie tickets, stop by my website at www.angelaruthstrong.com, and sign up for my newsletter or send me an email while you’re there. If you miss watching Finding Love in Big Sky on the big screen, it will air on UPtv on (my parents’ anniversary) 9/11. We can all use a feel-good movie now and then.