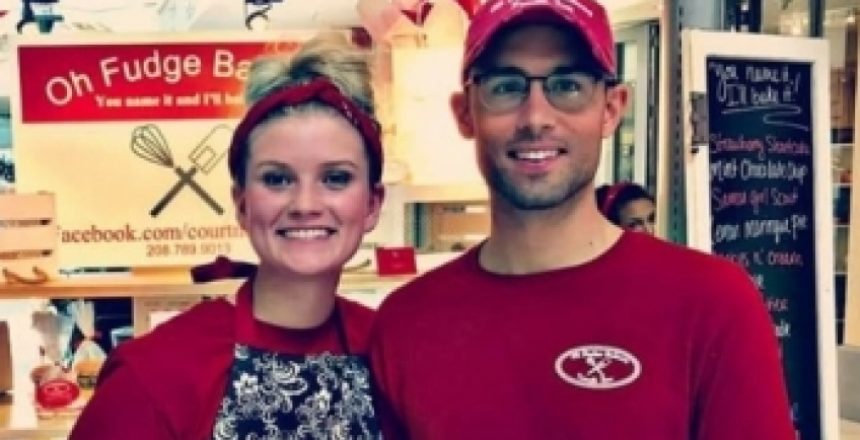 Young married couple, Courtney and Adam, work seven days a week at their Oh Fudge kiosk in Boise Towne Square Mall. Along with a sample of fudge, they hand out slips of paper inviting people to get to know not just them but the God they serve. (Courtesy photo)  Publisher’s Note: Since the original printing of this article both Adam and Courtney have encountered some health issues have forced the to replace their manned kiosk at The Boise Towne Square with an informational kiosk with information on ordering their wonderful fudge. We love them both, and ask you join us in prayer for only the best for them as they continue to serve The Lord in all they do.

Many Americans possess a notorious love of shopping. As eager members of a consumer society, they shop for all kinds of things — shoes, books, appliances, and more. Now, there’s a place where they might stop to shop for a little dose of faith and a moment of prayer. Surprisingly, that place is right in the center of the valley’s busiest shopping hub.

Adam and Courtney Shumate opened Oh Fudge Bakery in the Boise Towne Square Mall on August 18, 2018. Courtney brings baking skills to the enterprise, while Adam contributes a knack for business and marketing. They both bring a commitment to spreading the Gospel message, even it it’s right in the middle of a bustling mall.

Adam, 31, met and married Courtney, 23, three years ago in Kerrville, Texas. Adam worked at Schreiner University in Kerrville and Courtney was a student there, majoring in physical therapy. Courtney was born and raised in San Antonio; Adam grew up in Boise. When she was just 10, Courtney’s grandmother Helene taught her how to whip up peanut butter and chocolate. Ten years later at age 20, Courtney revisited the recipes without Helene’s supervision.

“It was the first time I’d made peanut butter and chocolate without Grandma,” she said.

Adam encouraged her to display her creation on Facebook, and it was a hit.

“A lot of people in Kerrville were interested,” he said.

Courtney’s Facebook page lit up with requests from people who wanted all kinds of specialty fudges to give as gifts for Valentine’s Day. They wanted a kind of personal fudge with a twist that made the confection unique for the gift giver, as well as for the gift getter. Courtney was open to making any kind of fudge the buyers wanted, responding to requests by saying, “If you’re willing to taste it, I’m willing to make it.”

And make it she did. Her sweet treats were cooked up in the confines of the couple’s 700-square-foot, 1-bedroom Kerrville apartment. At the end of a day of fudge-making, Courtney said she and Adam sat down on the couch and discussed the possibility of starting a business around her fudge treats. They even came up with the name: Oh Fudge Bakery. In 2016, Courtney got a food handler’s license in accordance with a Texas “cottage law” for businesses that are operated out of a residence; she worked with the health department there and created a label for her Oh Fudge products.

The couple was making money and giving back at the same time, even starting a Caring for Kerrville auction for three people in need that Courtney met while selling her goods at a farmers market. Courtney went from business to business in Kerrville, seeking items to auction off. A live Facebook auction raised $1,300 dollars in three hours, she said. The money was split three ways for the three people who needed it.

The couple eventually returned to Adam’s roots in the Treasure Valley, moving to Boise during Christmas of 2017. They thought they were leaving the fudge business behind. Both of them got other jobs, but they seemed to have a call on their lives for (of all things, perhaps) making and selling fudge. Adam launched a Kickstarter campaign to raise funds for a revived Oh Fudge Bakery.

“There were goals and incentive-based options for funding,” he said. For instance, if a person donated $120 to help re-start Oh Fudge, Courtney would create and name a fudge just for that person. People seemed to love it, and the couple got responses from all over the world, from Portugal to South Korea, they said.

They were careful to be upfront and open about everything they did; people could follow them on Facebook or Kickstarter and see the making of the fudge and monitor Adam and Courtney’s progress toward re-opening the fudge company. The duo set a goal to raise $3,500 and ended up with $6,500.

“I did it all on here,” Adam said, holding up his smartphone.

It wasn’t long before they were opening up their Oh Fudge kiosk at Boise Towne Square Mall. Adam was very mindful of the kiosk’s location. It is near two famous, popular confection sellers. “It’s a spot for anyone who likes candy,” Adam said.

Oh Fudge is an uncommon business for the mall. Boise-based in every way, the product isn’t shipped in from out of state. “I’m the only one who brings it from home,” Courtney said. She and Adam took a step up from their modest 1-bedroom apartment in Kerrville and now own a townhouse in Boise, where they’ve converted the garage into Courtney’s commercial kitchen. The couple works hard, putting in 12-hour days six days a week, with an 8-hour day on Sunday. Courtney has to bake the fudge when she’s not at the kiosk, so sometimes she bakes at night; at other times, she leaves Adam to watch the kiosk while she bakes during the day.

But the kiosk is a source of fellowship and friendship for them. They enjoy their customers very much. “We try to tell them our story and connect with them,” Adam said. The fudge entrepreneurs hand out samples to passers-by at the kiosk. If people stop to try the fudge and are willing to listen for a minute, they’re given brief information about Oh Fudge’s offerings and are handed a business card and a slip of paper with a message that reads, in part:

“Come join Oh Fudge Bakery in our walk with Jesus Christ, our Lord and Savior. We choose to use our business to the best of our abilities to share God’s message of peace. … If you’re in need of a friend, prayer, or simply someone to talk with, don’t hesitate to swing on by and see us.”

Courtney said, “What really motivates us is we wanted to have a Christian business.”

Adam said, “We felt this business was a vehicle to spread Christ’s message. We felt He’s on our side here.”

They’re making connections. “We work every day. We don’t get out much,” Courtney said. The kiosk is not just business, it’s social.

The $5 bag is their minimum sale item, with prices reaching $40 for a larger amount of fudge that may be a special request from the purchaser (a watermelon fudge, for instance).

Even though the business is working for them, they stress they’re not motivated by the possibility of making lots of money; and they’re very aware that what they do is the exception rather than the rule at the mall. Pointing to the kiosk, Adam said, “This is material, a conductor for us to reach out. The kiosk amplifies our work, but it’s just a shell. What matters is the people stopping here and walking past us — I always see the people.”

“I’m no miracle worker,” Courtney said, “but I know what I can do.” For her, that’s caring about and praying for the people who visit the kiosk. “I may be shaking, but I’ll do it if they ask,” she said. “I’ve got to keep my confidence.”

Adam said, “I’ve learned how to accept rejection.” He explained he stands at the kiosk and asks people if they want a fudge sample. Some will say no and some will just ignore him. He’s undaunted, and he likes the kiosk just the way it is, where it is. He likes that it’s outside in the corridor where people pass by it, as opposed to a store that people walk into with a deliberate purpose to buy a specific thing.

“There’s a uniqueness to the kiosk; it catches people off guard,” he said. When they pass by, they originally had no intention of tasting or purchasing fudge; they’re just passing by on their way to somewhere else. “This is an interaction outside of their normal plans,” he said.

He also likes that he and Courtney are self-employed. “If we need a half hour with a customer, we take a half hour, and nobody micromanages what we talk about.”

One of their most recent interactions was when a man with a health issue came up to the kiosk and was trembling. He needed something to drink, so Courtney got him a Mountain Dew and asked if she might pray for him. He was willing, so they prayed in the open at the kiosk and eventually the man stopped trembling and began to feel better.

The tables are sometimes turned when people come up to the kiosk and ask if they may pray for Adam and Courtney. The couple has made a number of significant contacts that way.

It should be noted that no one is forced to participate in prayer at Oh Fudge. It’s optional, and no one is made to feel uncomfortable. Anyone may take a fudge sample, or make a fudge purchase, and be on their happy way. Adam and Courtney make everyone comfortable and are friendly with all.

Still, they won’t compromise on the primary purpose for why they operate Oh Fudge and have such a visible spot in the mall. “If our message creates an issue, we’ll move the kiosk somewhere else,” Adam said. They won’t change the way they operate. “For us, it’s not just the fudge. This is something we feel compelled to do.”

The fudge is fun and delicious, but it’s a conduit, a means to get a message out to anyone who might be interested in hearing it.

For more information, go to Oh Fudge Bakery on Facebook.