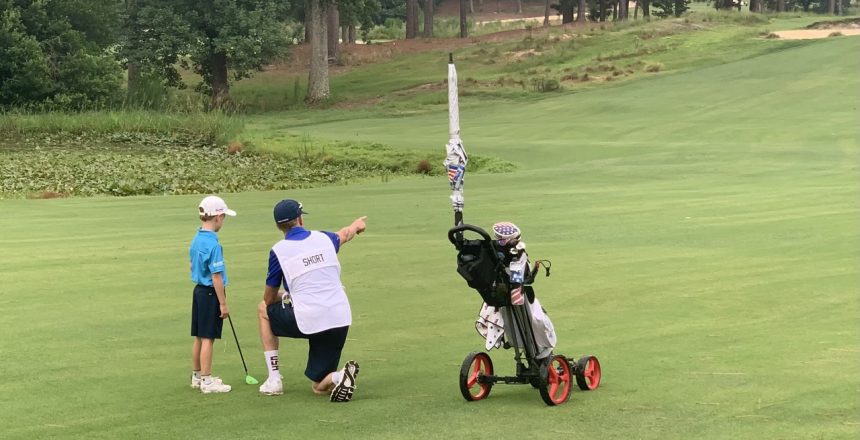 Bill Short and his son Kristian enjoy a round of golf together. At merely age 7, Kristian possesses innate skills at golf, but his dad helps with instruction from time to time. He is also teaching his son to live out his faith on the golf course. (Courtesy photo)

Many a father and son take to the golf course together, especially when the sky is blue and the weather is warm. But late last year, Bill Short and his son Kristian played nine holes at BanBury Golf Course in Eagle the week before Christmas.

The temperatures were pleasant, the sun was shining. It wasn’t a competitive match, but of course they kept score. Kristian won with a score of 35, while his dad golfed a 42. Bill Short couldn’t have been prouder of his little boy.

At 7 years of age, Kristian Short is something of a golf prodigy. The fact that he beat his 48-year-old father at golf only made the old man beam.

Kristian has always been an early bloomer. Golf caught his attention at the grand age of 3, when his dad and grandfather were playing the game. “I bought him some plastic clubs,” Bill said.

Kristian progressed up the ladder of beginner clubs pretty quickly. After that first set of plastic clubs, Dad bought him some better plastic clubs. Shortly after, Bill purchased some real clubs for his son, and then, it was time for custom-made clubs.

Golf has become more than a sport for the males in the Short family. “I’m trying to give Kristian every opportunity to not only excel at golf but to use this platform to spread the love of Jesus,” Bill said.

Kristian attends Calvary Christian School in Boise. He has a favorite Scripture – Isaiah 9:6 – and in accordance with his school requirements can quote it easily, readily, and flawlessly: “For unto us a child is born, unto us a son is given: and the government shall be upon his shoulder: and his name shall be called Wonderful, Counsellor, The mighty God, The everlasting Father, The Prince of Peace.” When asked what he likes about that Scripture, Kristian said he loves it because “that’s when Jesus first came to the earth to save us.”

The youngster has been golfing for more than three years now and, in the last year, won seven tournaments and qualified for and played in the U.S. Kids Golf World Championship at Pinehurst, N.C. in July of 2021.

He didn’t start out a perfect player, according to his dad. “When he started, his hand grip was backwards and his score was more like a good bowling score,” Bill said.

Bill signed Kristian up with golf instructor Jake Vetsch of Boise, and in a very short time, his boy’s golfing stance and swing improved and he was taking stroke after stroke off his score.

Said Jake of his very young student: “Kristian is the best junior that I teach; he’s the most serious so far. He says he wants to be a professional, and he’s a natural. I show him something and he nails it the first time.”

Bill wants his son to have self-confidence but also to be humble. He taught him to praise God after both a good shot and a bad one, and when they encounter mean kids or parents at golf tournaments, they respond with courtesy. “We want His light to shine through us in the way we treat them,” Bill said.

Kristian’s favorite golfer is Ben Crane, a man he admires for both his golf skills and his faith. He wants to emulate his hero in both tournament wins and charity and would like to build houses for needy people someday if he’s able. When the Short family – along with wife and mother Ann – met Ben at a tournament, the golfer signed a golf ball for Kristian and drew a cross on it.

If it seems daunting enough to keep a 7-year-old golf whiz humble, know that Kristian also excels at Taekwondo martial arts and has a pretty good arm for throwing a football, too. Still, at this point he doesn’t seem to take himself too seriously. “I’m never perfect,” he said with a smile. As for how competitive he might be, all he knows is that he has made plenty of new acquaintances through his tournament wins. “I make a lot of friends,” he said.

He also has 1,537 ‘friends’ on Facebook from all over the world at Kristian Anderson Short – Golf.

As for his parents, they are not ‘stage parents’. They don’t pressure their only child to win at all costs. They also don’t force him to play golf.

“At his age, it’s more about giving him opportunity than forcing him,” Bill stated, also acknowledging that staying good at golf takes practice and commitment. “You really need to play golf at least five days a week to stay sharp, and to do it year-round.”

That may look like playing a round of golf, just hitting balls on a driving range, or practicing on a putting green. Bill works to keep it all fun for Kristian. “We’ve played at night with glow-in-the-dark balls.”

That isn’t to say that golf isn’t taken seriously in the Short household. Even at his very young age, Kristian has a personal trainer – he has to stay in shape – and a chiropractor to make sure he’s not out of alignment by standing a certain way for golf.

Bill allows his son personal choices. That might include golfing, going to the dog park, skiing, or some other fun activity. Often, Kristian chooses golf, but he also may prefer to go to the dog park or take to the slopes.

“I’m nudging him,” Bill said. He also uses words such as “incentive” – and even “bribe”.

“I bribe him with ice cream,” said the proud dad.

And don’t forget the word “motivate”.

“I motivate him with good things and told him that if he won the Boise spring and fall golf tournaments, I’d get him a puppy.”

After all, a kid can’t go to a dog park without a dog. Not surprisingly, Kristian won the tourneys and got himself a puppy, a chocolate lab he named Patriot – for his love of country, according to Dad.

About his wife, Bill said: “Kristian’s mother is amazed by the talent God has given him. She always reminds me that he’s just a kid, but she recognizes that when he’s on the course he looks, acts, and plays like a PGA golfer.”

Bill sometimes serves as his son’s caddy and may suggest a certain club for a certain shot, but Kristian has his own ideas – sometimes good, sometimes not. “Part of what I do is teaching him, too,” Bill explained.

Kristian will sometimes hit a bad shot, but Bill has taught him that it’s always about the next shot, not the last one. He is still in awe of his son’s skills. “Even today, when he hits the ball and it’s perfect, I can’t believe it.”

Kristian makes losing at golf to a child a good experience. Said his father: “He is truly one of the sweetest, kindest 7-year-olds you’ll ever meet.”

Kristian will be playing in his school’s golf tournament on May 20. Anyone who would like more information on the tournament may contact Bill Short at (208) 392-0048.