Jordan Hodges: A Lesson In Not Giving Up On Anybody 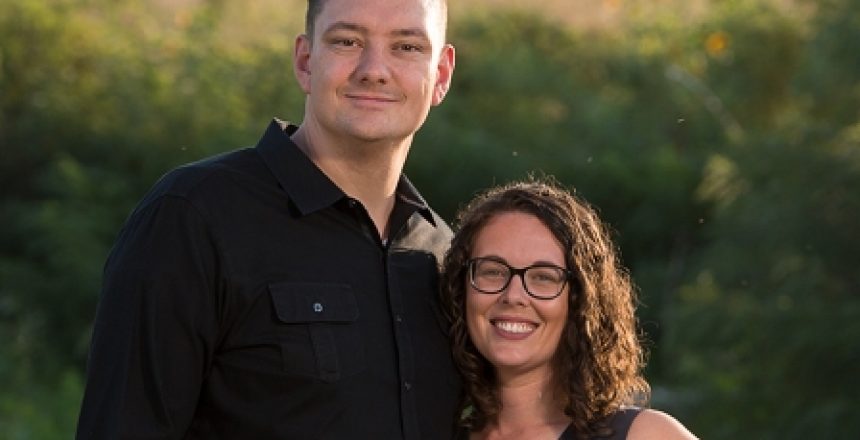 Jordan Hodges and his wife Amanda once walked together on the wilder side of life but now pastor as a team and are raising two little boys. (Photo by Jasmine Vandeventer)

God is not an umpire, standing behind home plate calling ball and strikes. He has no “three strikes, you’re out” policy. If He had, Jordan Hodges could have been easily tossed from the game forever. But Jordan’s story is a testament to why God doesn’t hold to a three-strikes rule when it comes to the creatures He loves.

Jordan describes himself as a man who gives 100 percent to whatever he does. Thankfully that energy is now channeled into serving God, but it wasn’t always so. Jordan once served the gods of methamphetamine.

Jordan’s parents divorced when he was 13; and while he said he doesn’t hold his parents accountable for what happened next in his life, he concedes he may have suffered in part from a “father wound.” Whatever drove him, it was a deep cut.

“I don’t blame my father for the divorce, but it was a breaking point. That was the beginning of me spiraling out of control,” he said.

He consumed drugs and sold them, even on his high school campus — “I had a $200 a day drug habit, and I had to sell drugs to make money.” He dropped out of school at age 17 — “I was in a full-time free fall, selling drugs and partying.”

His wild life caught up with him when he sold drugs to a confidential informant working in tandem with law enforcement officers. He’d sold the CI an ounce of meth. It was that .0625 pound of illegal substance that sent Jordan into a string of incarcerations that included a 6-month prison rider in Cottonwood and time behind bars at both Ada and Canyon county jails.

In 2005, he ended up in the Ada jail after entering a house in Meridian that was not actually where he lived. “I was high as a kite and messed up and it was the middle of the night. By the time I was arrested, I was a monster, and my body was breaking down.”

He was 19. After that arrest, he was put in detox in a medical security unit. He was getting help for his addiction and at the same time opening up to spiritual wholeness. He was visited by Rick Rigenhagen, a man who ran a motorcycle ministry called Soul Zone. “I was saved in the visitors’ area of the county jail through glass.”

Unfortunately, that wasn’t the end of his journey through the shadowy side of life, but it was the start of something that would culminate in the bright light of salvation, including freedom from addiction and a monster’s existence.

He’d surrendered to Jesus, and while he was technically saved, after he got out of jail he started peddling and using drugs again — “I went back to what I knew.”

Part of the problem, he said, was the lack of support in the faith community and a lack of youthful friends he could partner with in spiritual growth. He had friends in the drug community, and he returned to them. But God was relentless in his pursuit.

Once again, Jordan opened up to the Lord. Once again, something inside him fought back. He was caught in the middle of a battle for his soul, at one point trashing Pastor Barry’s office. Rick and the pastor fought with him, praying intensely that Jordan would win. Jordan felt victorious enough to run to the police and confess he was wanted on warrants — he wanted to walk the straight path of a law-abiding citizen. The officers were more than happy to take him to jail.

Now comes one of the most pivotal meetings of Jordan’s life. Enter Monty Sears, who had just been named senior pastor of Christian Faith Center in Nampa. Jordan’s mother had asked Monty to visit her son in jail; he did, and the two men connected. Monty has said that the Lord spoke to him about Jordan. “Keep him close to your heart,” He said. “He’s going to play a big part in what I’m going to do in the valley.”

After his release, Jordan worked at CFC, licking envelopes and whatever else was needed. There are two scriptures that help explain what happened next to the 20-year-old young man around this time. They are Luke 11:24-25 and Matthew 12:43-45 — Jordan’s spiritual house was clean but empty. For the second time, he returned to his old lifestyle; but as it is explained in the two scriptures mentioned, this time it was war, and a dark war at that.

“When an impure spirit comes out of a person, it goes through arid places seeking rest and does not find it. Then it says, ‘I will return to the house I left.’ When it arrives, it finds the house unoccupied, swept clean and put in order. Then it goes and takes with it seven other spirits more wicked than itself, and they go in and live there. And the final condition of that person is worse than the first.” — Matthew 12:43

“That happened to me,” Jordan said.

He admits he was struggling hard to get back on his feet and leave his old life behind for good. While on a meth high with the woman who is now his wife, Amanda, he saw disturbing images from the demonic world, and God’s voice came through with a warning: “Jordan, this is where you’re choosing to be.”

The warning was clear: Get. Off. Drugs. The Lord’s final caveat was: “If you ever go back to drugs, you’ll die.”

If Jordan’s life were a movie, this would be the “fast forward to 2019 scene.” Both Jordan and Amanda are drug-free. Over the intervening years, they’ve worked at Christian Faith Center in many capacities, from greeters to ushers to janitors. Jordan is now lead pastor*, while Amanda teaches in the church and oversees ministry to women and CFC’s annual women’s conference. “She leads by my side,” Jordan said. The couple has two sons.

“This is a journey that has been 12 years in the making,” Jordan said. “This is the only church I’ve ever known. Monty and his wife Kelli are spiritual parents to me.”

The church now has multiple campuses, and thousands have been saved, according to Jordan. “You don’t reach the people you want. You reach the people who resonate with what and who you are — a person with a lot of broken places. Eighty percent of the growth at the church has been people with broken backgrounds giving their lives to the Lord.

“Some people’s view of Christianity is pretty sterile, but Jesus was attracted to the broken people. A ministry to the broken reflects the heart of Jesus,” he said.

His own past helps him relate to others’ trials. “I like to say, ‘The black sheep makes the best shepherd.’ We’ve led thousands of people to Christ through a broken-up kid.”

He describes himself now as down-to-earth and able to connect with all sort of folks. “As a young leader, people want to know you have something to say. I’ve lived some life; it’s not theoretical. My story has given me credibility. You can impress people with your gifts, but you really impact people with your scars.”

What about the people who knew him years ago as the spiky-haired drug dealer, almost always on a substance high?

“In the beginning, there were people who heard of my new life and said, ‘No way.’ But after 10 years pass and you’re still following the Lord, they start to think, ‘Okay, maybe this is real after all.’”

Some have told Jordan they wish they had a story like his. His response to that is an unequivocal, “Oh no, you don’t.”

*Jordan is lead pastor over all the Christian Faith Center campuses, including the new Boise campus, which opened February 3 at 5823 W. Franklin St. He will be preaching at the Boise campus primarily but will also be preaching on occasion at the Nampa campus as well. His wife, Amanda, will lead the Boise congregation alongside him. For more information, go to jordanhodges.com or experiencecfc.com.