Casey & Andrea Dillabaugh A Business and Ministry Model of Caring 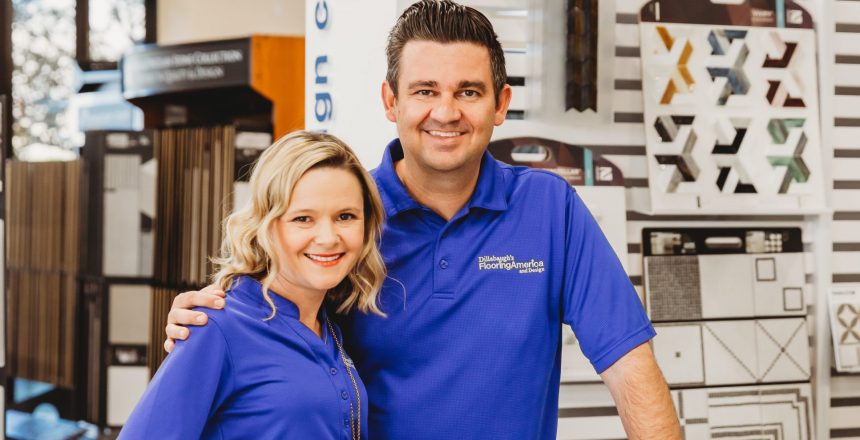 Anyone who might ask entrepreneurs Casey and Andrea Dillabaugh, “Is that any way to run a business?” could be told without hesitation, “Absolutely affirmative.” That’s because the manager duo sticks to a threefold plan to care for their staff, customers and community – and, yes, caring is key to their success.

The Dillabaughs own Dillabaugh’s Flooring America, a business that has been in the Dillabaugh family since 1982. For Casey, involvement in the company goes way back to when he was a boy of 12 and his father put him to work. “He had me working with the installation crews,” Casey said. In fact, the patriarch had his son working in a number of departments, including accounting. It was a foundation in the family firm that Casey would leave for while, return to, and eventually build upon – all in God’s perfect plan and timing.

As for Andrea, her involvement didn’t come until after she and Casey met while attending Point Loma Nazarene University in San Diego; they got married right after graduation. Then the newlyweds both got jobs in San Diego. However, a God-motivated life change was ultimately on its way.

“In 2008, the Lord laid it on my heart that it was time to begin the transition of taking over the family business,” Casey said. When he told Andrea what God had shown him, she admits she was initially surprised. Then God worked on her heart too, until they both realized that the move wasn’t going to be ‘just business.’

“We weren’t being called back to Boise just to sell carpet,” Casey said.

The plan was bigger than that. The business was also going to be a ministry.

“Carpet – flooring – was a means to reach people and to further His kingdom,” Andrea said.

If it sounds a bit unconventional for a ministry field, Casey explained that when he would go to church and see a map of the world designating all the places missionaries were serving, he’d wonder how he could possibly do something like that. He had family and other commitments right here in the U.S. He experienced a bit of a revelation when he realized that you don’t have to go somewhere else in the world to be a missionary and serve the Lord and other people – you can do it right here at home, even from a flooring store.

“We’re here to love; this is our mission field,” he said.

He explained his and Andrea’s business-ministry model this way. “We live to love on three different platforms:

“The third platform is to love on our community.”

One creative way that Dillabaugh’s recently created to love on the community is a program they call Dillabaugh’s Restores (www.dillabaughsrestores.com), a way of giving back.

The couple researches charities and “does a lot of praying about it,” said Andrea. They then select five philanthropies and have creative t-shirts made with the organizations’ logos on them – and this is where Dillabaugh clients enter the picture. “We wanted the clients to be involved,” Casey said. “They get to choose a charity.”

He explained that when clients sign the paperwork for their purchases, the salesperson asks them which of the five charities they’d like to support by selecting a t-shirt that highlights that charity. When a charity is chosen by a client, the Dillabaughs donate $5 to that organization. The clients are given information about the charity they chose, so that, if they’re wearing the shirt and someone asks about it, they’re ready with an explanation. (There is no obligation, of course, but most people enjoy the opportunity to, as the Dillabaughs put it, “be a hero to a variety of well-deserving organizations.”)

He continued: “The why behind the program is that we have a unique platform with a relatively large business. We wanted to raise not just money but awareness about the non-profits we help.”

The Dillabaughs have not been without their own challenges. They returned to Boise in 2008, right in the middle of a major recession. Andrea said that while it was a bit scary and sometimes quite difficult, they continued to trust God.

“It was amazing watching the transition from Casey’s dad owning the company to Casey taking it over, and they worked together on it. There were hard years, and we had to make changes,” she said.

Casey confirmed her view and stated, “Hindsight is 2020. Looking back, I see that God knew exactly what He was doing. In 2008, when the economy was crashing, my dad and me together learned much through the recession and weathering that storm. It prepared us to handle the COVID-19 better. God writes the story; we’re a part of the story, and He directs it.”

Regarding the pandemic, Casey said, “We shut our doors for a while.”

But Dillabaugh’s isn’t just a retail store. It sells product when homes are built, and sells to commercial enterprises. When construction was deemed an essential business, there was still revenue coming in.

“And when we unlocked our doors, business came back strong,” Casey said. “All through my life, God knew exactly what He was doing, and the skills I would need.”

Casey and Andrea bought the business on January 1, 2015. Asked if they feel any pressure to act differently when clients and staff are watching them as believers, Casey said, “When people see our lives, it piques their curiosity.” But he said he feels no pressure to be perfect, since he walks in grace. “I am a self-described sinner. There are 115 people on staff who are imperfect.”

“What the Lord has done in the business, and His hand on the staff… We have been with them in their joys and in their tragedies,” Andrea said. “We have been in the hospital with some of our staff, praying for them.”

“We walk alongside our staff – there’s not a lot of places that do that,” Casey said.

“There is a Dillabaugh family,” Andrea said, meaning employees and clients. But there is also a Dillabaugh family of two parents and three kids. Both Casey and Andrea come from families of faith and were brought up Christian from the beginning of their lives. They are raising their own children the same way. Their daughter Kendall is 9 and in the fourth grade. “She has a heart for the Lord and loves worship music,” her mom said.

“Our daughter Kyla is in first grade, and she has experienced a hearing loss and wears hearing aids. She calls them ‘her pretties’,” Andrea said. “She’s a tough kid and won’t let her deafness stop her.”

Caleb is 4 and his dad said he’s “pure boy.” He recently learned a new prayer in school and taught it to the rest of the family over dinner.

There is a huge chalkboard at the Dillabaugh’s store at 2895 S. Federal Way in Boise, and a large chalk message is written on it. It is a statement very important to Casey and Andrea. In reads, in part: “The abundance of good that resides in the community leaves us humbled and blessed, yet obedient to the tremendous responsibility as stewards not just to our clients but to those less fortunate.”

“We don’t see people as transactions,” Casey said. “We want to serve them, not sell them. After almost 40 years in business, we’ve been blessed.”