Care House Partnerships: A Powerful Blessing in the Neighborhood 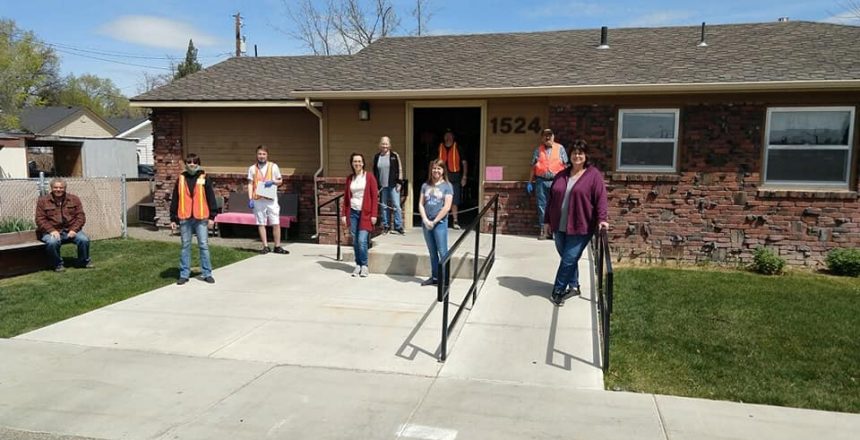 One of the many programs of Care House Partnerships is a food bank located at 1524 S. 6th St., just across the street from Nampa First Church of the Nazarene. The church seeks to love its neighbors through a number of service programs. (Courtesy photo)

Being a good neighbor is a big deal to Nampa First Church of the Nazarene. The neighborhood surrounding the church building at 601 16th Ave. S. has benefited greatly from an outreach program of First Church called Care House Partnerships.

According to Care House history, in 1981 then-pastor Charles Higgins established a committee to study the needs of lower-income residents in the area surrounding the church, with an eye toward serving their needs. In December of that year, a Care Room opened at the church, offering free clothing, food, and other items to those in the vicinity.

Over the intervening 39 years, the original offerings broadened out to include a Celebrate Recovery group, medical services, mental health counseling, after-school tutoring for kids, and a foster/adoption support program. The partnership part of Care House came through the development of alliances with other organizations in the valley, including Love INC, St. Alphonsus Hospital, Terry Reilly Health Clinics, and others.

“We are striving to create wrap-around services in the same area so people don’t have to travel all  over for what they need,” Tony Johnson, pastor/director of Care House Partnerships, said.

The average annual wage in the area is $22,000 a year, according to Johnson, and one of the most utilized outreaches of CHP is its food bank, located at 1524 S. 6th St.

“The people who come to the food bank are generally struggling between paying rent and utilities and buying food, and rent wins out over food,” Johnson said. “Prior to the pandemic, we saw a growing number of seniors on Social Security; the food bank was the place they’d come to get food when their benefits didn’t keep pace with the cost of living. We also saw a growing number of grandparents raising grandkids.”

But the Covid-19 pandemic and its subsequent shakeup of the economy started driving younger families to the Care House Food Bank. “The breadwinners lost work,” Johnson said.

The food bank is open Tuesdays, Thursdays, and Saturdays. During one late April/early May opening, Johnson said the bank’s fridge and freezer were “packed to the gills”, but by closing, they were completely empty and volunteers were struggling to refill them.

The food bank gets a good portion of its provisions from the Idaho Food Bank and from a program called Food Rescue, where Care House Partnerships’ volunteers go to area stores to pick up food that would otherwise be discarded, even though it is still good.

People in the community also bring in donations of goods.

“There is a lady who lives near the church and she has plum trees; she picks what she can reach and brings them in, and then says, ‘Anybody who can climb the ladder can get the rest,’” Johnson said.

Also, a pastor once gave a sermon on the topic, “What’s the Holy Spirit nudging you to do?” A farmer who heard the lesson felt he was being nudged to give a portion of the corn from his cornfield to the food bank.

There are other sources as well, both individuals and corporations. The Simplot Co. and area meat packers have given food, and the church also holds Dollar Sundays, where parishioners put a dollar bill in the offering and it goes toward items for the food bank. Even other churches of other denominations have contributed; and occasionally someone will call the food bank and just say, “We have food — come get it.”

The general consensus at the food bank is that “God always gives us enough food and enough volunteers to meet the need — it’s His food, not our food,” explained Johnson.

Neal Moore, facilities director at First Church of the Nazarene, is also director of the food bank, with Johnson serving as overall director and pastor of Care House Partnerships. While Johnson has held his position for just two years, Moore has spent 39 years as facilities director and roughly 30 as food bank director. Even prior to that, he said, he worked behind the scenes hauling food for the ladies who ran the food pantry years back.

The pantry struggled with leadership for a time, he said, until he was named director.

“When I took it over, we changed it from the bottom up,” said Moore, explaining that at the time it was more of a clothing thrift store, filled with about 70 percent clothes and 30 percent non-perisable food items. But the clothing was seldom purchased and largely just collected dust, so, he said, “We got out of the clothes business and got into the food business. It was God’s doing, not mine — and He’s been really patient with me over the years, with teaching and training.”

The motto of the food bank became, and still is, “’Food, prayer and friendship.’ … We don’t talk a lot about religion; we start with getting to know each other,” said Moore.

It was a change of focus that Moore once again gives God credit for.

“God had been working on the people in the church and the ministry for a season,” he said.

Essentially what it boiled down to is, a lot of the people who came to the food bank were not going to come to church first. There had to be an acceptance of the food bank people in the hearts of church members.

“The church is huge, the walls are threatening,” Moore said. “The food bank is non-threatening.”

The Care House Partnerships’ food bank now hosts a free community dinner on Wednesdays — literally inviting people to dinner as a way to get acquainted, to break bread together and have a conversation over a meal. “We listen to their stories and become a friend,” Moore said.

According to the director, the heart of the church had to be prepared for the people who would come through, not just to the food bank but to the many programs of CHP. It’s frequently about withholding judgment of people who wear tattoos and look like someone the police might be after. It was a complete softening of the collective heart of the church for people who might look a lot different from most of the regularly attending church congregation.

“We were reaching church people, but our community outreach was not strong — we were in a bubble,” Moore said.

They were aware of their fellow parishioners and their needs; they worshiped and prayed together. But on the other hand, the needs in the nearby neighborhood outside the church walls could have been a world away. Now, the food bank and other services of Care House Partnerships are there for ministry not judgment, and that includes not judging people because of their needs. Tony Johnson said there’s a general notion that people who come to food banks, for instance, are abusing the system and taking advantage.

“I take offense at that,” he said. “We’ve found that 75 percent of the people come three times a year or less. People don’t realize how much shame a person deals with about coming to the food bank. It takes a lot of humility in a person’s life. People are coming because that’s what they need to get through this season of their life.”

The pandemic affected how many things operate, and some programs of Care House Partnerships were completely on hold as of mid-May, while others were moved online. “Things certainly are different due to the Covid-19 crisis. Our food bank has seen a 70 percent increase in new families that we serve weekly,” Johnson said. “Our Celebrate Recovery ministry has cancelled our weekly large group gathering and has moved our open-share small groups to ‘Zoom’ small groups so people are able to continue to get the encouragement and support they need in this new situation.

“We had to cancel our after-school tutoring program because of the school closings, yet our director and assistants are keeping in touch with the students to make sure they are doing well. So yeah, ministry is a little different during these times.”

Some of the temporarily cancelled programs of Care House Partnerships may come back under Gov. Brad Little’s Rebound Idaho phased re-opening, so interested people should contact CHP for updated information (see contacts below). Also, a new program is on the horizon for late summer: a medical and mental health clinic at 1511 7th St. S.

Regarding his longtime commitment to the church and the food bank, Neal Moore said: “It’s amazing how God uses me as a tool to help people rebuild their lives.”

Over the years, he’s helped people acquire food, clothing, appliances — almost anything they needed. He said someone will give him a mattress and within days someone else will come in needing a mattress, and he’s got one — or a fridge or whatever else they’re lacking.

Moore applauds all the aspects of Care House Partnerships, from food distribution to health care to tutoring kids. “It’s a very tight network; the people love each other and have a heart to serve the community,” he said.

Nampa First Church of the Nazarene has redefined neighborliness and made it into a ministry to the unchurched.

For more information, go to http://carehousepartnerships.org/, on Facebook at Care House Partnerships, or on Instagram at https://www.instagram.com/carehousepartners/. Tony Johnson’s full title is pastor of community engagement and recovery, and he describes himself as a “prisoner of hope”; he may be reached at [email protected]. Neal Moore is available at [email protected].