Arlene Robinett: She Walks In Prayer For Her Community 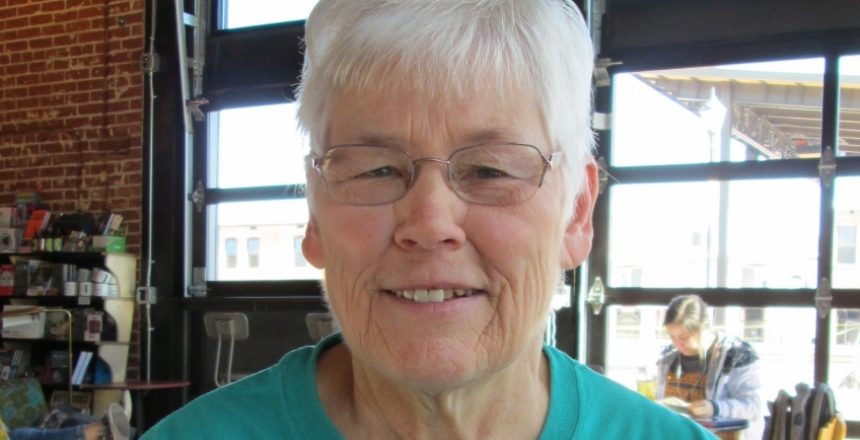 Arlene Robinett has been the coordinator of the Caldwell Prayer Walk since 2008. (Photo by Gaye Bunderson)

No town is too big or too small to be encircled in prayer, for its government, its citizens, its economy. Praying for your community is easy to do; in fact, it’s a walk in the park — or a walk TO the park, as the case may be. Arlene Robinett of Caldwell has been praying for her community for 15 years, and it all started with a house smeared in gang graffiti.

Arlene had a good friend named Sylvia Pugsley, and near Sylvia’s residence was an abandoned house with the gang symbols WSL and ESL sprayed all over it. The acronyms stood for a west side gang and an east side gang. Sylvia wanted to get the graffiti off the house, so she did what any concerned citizen would do: she took her problem to city hall. She found out that the house belonged to a woman in Meridian. Sylvia was given her phone number, made a call, and discovered that the house’s owner was so eager to get the graffiti covered that she offered to buy paint and supplies if Sylvia would find a way to get it painted.

Sylvia found a way all right. She took the problem to her church, Caldwell Free Methodist, and a number of congregants volunteered to pitch in with the painting project. Arlene was one of them. People from teens to retired folks picked up a brush one Saturday and rid the house near Sylvia’s of all its unsightly, spray-painted symbols.

But that was just the beginning.

“Sylvia held a Bible study in her house,” Arlene said, “and everyone was welcome.”

A couple on drugs came to the Bible study at Sylvia’s a number of times and was not turned away. “Sylvia was very kind and wanted to help people,” said Arlene.

There was another house near Sylvia’s where meth was a problem (a situation unrelated to the couple who attended the Bible study). Then, a man moved into a house by Sylvia, and he had very little in the way of material things to furnish his home. Never a passive, apathetic neighbor, Sylvia took all these situations to the Lord in prayer, as well as to her church. She always invited others to church; and frequently, they would join her.

At Free Methodist, there was an elderly woman named Helen Kesner, who Arlene describes as an amazing prayer warrior. “She’d pray for the town, the state, the country, and even for international things,” Arlene said.

It was Helen who suggested to Sylvia that she start a prayer walk for Caldwell — an idea Sylvia had also been thinking about. So both Sylvia and Arlene got on board, and the wheels of an annual spring tradition started turning. Sylvia wrote up a letter to send to all the churches in the community, while Arlene got church addresses out of the Yellow Pages. The two women wanted a non-denominational prayer walk and sent letters to all churches, regardless of denomination. They also visited businesses in the community to inform them of the prayer walk. “We were two ladies with a heart for the city,” Arlene said.

The Caldwell Prayer Walk was a success from its beginning in 2005. The women based the walk on Jeremiah 29:11: “For I know the plans I have for you,” declares the Lord, “plans to prosper you and not to harm you, plans to give you hope and a future.”

Initially, a police escort accompanied the walk, which wends its way through the downtown core of Caldwell, with stops for prayer at the police station, city hall, and other sites. At one point in the walk’s history, an entire Hispanic church congregation participated and there were two groups of walkers, one with 50 people and another with 75. The Hispanic pastor prayed at the police station as they walked the route.

Arlene was named walk coordinator in 2008 when, due to health issues, her friend Sylvia was not able to participate any longer.

The walk is a little over one mile in length and takes about 1 hour, 10 minutes to complete. Its final stop now is the Indian Creek gazebo. The 15th Annual Caldwell Prayer Walk was held Saturday, April 13, commencing at the corner of Kimball and Grant streets. The prayer list this year was lengthy, as it always has been, and included the following (from one of Arlene’s flyers):

Arlene recommends that people in other communities take up the idea of a prayer walk — or something similar — and run with it. She believes that Caldwell has benefitted from the event. For instance, many new businesses have opened in the community, and its downtown is thriving with not just enterprises but an ice skating rink and places for people to come visit with one another.

Mind you, Arlene isn’t patting herself on the back for successes in Caldwell, and the community still needs prayer for plenty of things. But the prayer walk has been very meaningful for Arlene and is something she’s still enthusiastic about. “It’s been really exciting — I give the glory to God,” she said.

She explained her prayer style is to “pray until it happens.”

At age 75, Arlene’s commitment to Caldwell is stronger than ever, and she wasn’t even born in Idaho. In fact, she was born in North Manchester, Indiana, where she grew up and attended church. She moved to Idaho on October 1, 1972 at age 28 when a close friend of hers started studies at what was then Northwest Nazarene College in Nampa. (Arlene earned a master’s degree in education from Indiana University.)

The move to Idaho was pivotal in many ways for Arlene.

“God had to get me to Idaho to meet the Holy Spirit,” she said, admitting that despite growing up a Christian and going to church, she had never really learned about the Holy Spirit, that no one had talked about Him. The revelation of God’s indwelling spirit in believers was deeply profound for her, and she now understands the void she felt as a younger woman, going from church to church.

“I knew I was looking for something,” she said. Her faith wasn’t complete because she’d never been taught about the Holy Spirit. When she finally learned about the third member of the Trinity, she said she “told everyone about the Holy Spirit.” She explained she has courage to speak up, but she also has tact, waiting for the Spirit’s leading.

When she got to Idaho, she also sought a spouse. “I prayed specifically for a Christian husband,” she said. She met Richard Robinett when they both worked at Simplot, but she confesses she kept asking God if Richard was the one. God finally told her, “Yes! He’s the one!” (The couple is still married.)

Anybody who would like information about starting an annual prayer walk in and for their local community may contact Arlene at 208-481-4568. Prayer and exercise make for the perfect combination.