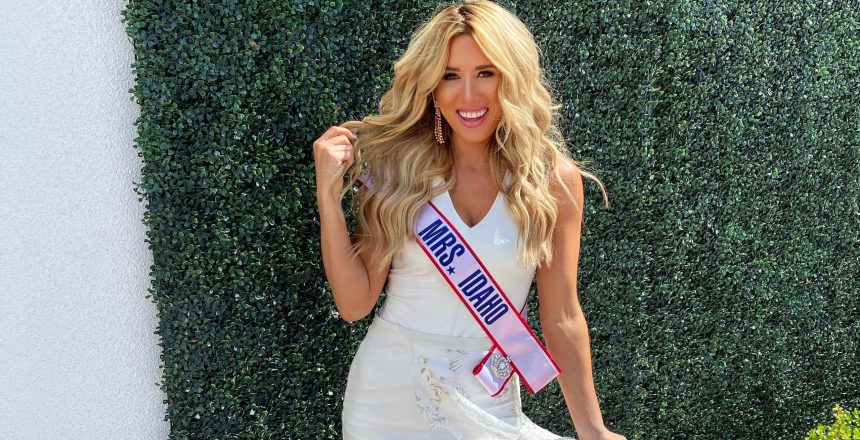 Whitney Kay Scott served as Mrs. Idaho America starting in 2020 up until June 19, 2021, when she handed her title to another woman. Whitney has known success and has a beautiful family, but she struggles with anxiety and has taken on the responsibility of being an advocate for mental health. (Courtesy photo)

Whitney Kay Scott has a message for anyone who has ever experienced anxiety, and it’s a message of support and encouragement.

Does the 30-year-old pretty blonde with a handsome husband and two great kids actually have a mental health issue herself? Yes and she’s not afraid to talk about it. It all started five years ago when she began experiencing anxiety. Knowing what she knows now, she said she would have navigated it all differently. But, back then, she was caught completely off guard.

At the time, her husband Brian was a professional race car driver with NASCAR and was set to retire. The couple has two children and always planned to return to Idaho when Brian left NASCAR. “The NASCAR lifestyle is not good for kids,” said Whitney. “Their dad was always busy and there’s lots of traveling.”

Whitney said she felt positive about the move back to Idaho and was excited about it. “I was being driven by our bus driver at the racetrack in a golf cart, headed to buy the last of my husband’s fan gear during his race practice, since it was his last race.”

While sitting in the passenger seat of the cart, she suddenly felt she couldn’t breathe. Since she and the driver were at a NASCAR stadium, she was taken to the infield care center, where injured drivers are taken, and was examined by medical staff. A nurse told Whitney she was just having an anxiety attack.

For her part, Whitney was certain she was having a heart attack. “It was so real; it hurt so bad,” she said, explaining that when her feelings were dismissed as ‘just’ a panic attack, she felt anger. “I thought they were missing something.”

But she was nonetheless sent away. “They did nothing, and I left with no information, education, or hope.”

She had the driver take her to a hospital. She was given tests but was told her heart was fine. Hospital staff also told her it was ‘only’ anxiety. She continued to struggle, and her struggles continued way beyond that single day. She was given medication for anxiety but found it ineffective.

“I couldn’t calm down,” she said. She ultimately admitted to herself that she did indeed have an anxiety disorder.

“It was a rough time in my marriage,” Whitney said. “People around me didn’t understand what I was going through. I wanted to be taken away – I didn’t want to feel like a burden to my family. I felt alone. So I learned to lean on God. In that way, I came to see it as not a negative but a blessing, as I learned to lean on Him and trust Him.”

With His help, she said: “I found a way out of my tunnel.”

She explained that, in her situation, anxiety tends to run in her family, so her mother suggested a Christian counselor that she had gone to and who had helped her. Whitney made an appointment, and her visits with the counselor continued for about 7 to 8 months, first once a week and then once every other week as Whitney progressed.

Whitney said the counselor would help her read relevant Scripture and would tell her about things Jesus did during His ministry; Whitney found strength and healing in that.

Now, teaching others about mental health issues – and working to erase the stigma – is one of her biggest missions, she said. “People have to realize they’re not crazy. I would tell people, ‘I’m Mrs. Idaho America, and I’m not crazy’. … I didn’t think I would ever share about my anxiety with anyone, but I felt a push from God that He wanted me to speak out and this is how He was going to use me.”

What did the pageant organizers think? “The pageant folks were awesome,” Whitney said, “and if you’d talk to the judges about it, you found out there were others just like you.”

Whitney realizes that anxiety doesn’t just go away, and that even if it’s overcome for a time, it sometimes comes back – that, and it’s sibling emotion, depression. Last November, she experienced a health issue and did not know what the outcome was going to be; with that, she started to sink into depression and anxiety. But she’s better once again.

“I realize it’s always going to be a part of me. There’s always a fear that it can happen again – it’s scary and dark. But now I have tools I can use – tools of knowledge and knowing ‘what works’ – and I bounce back quicker,” she said.

She feels her first major anxiety experience was prompted by the move she and her husband were planning – big life changes and unknowns can do that. Whitney also said anxiety feels different for each person.

Due to COVID-19, she wasn’t able to speak a lot in person during her reign as Mrs. Idaho America, so she got on Instagram, where she shares tips with others and talks about normalcy. “I’m using my Instagram platform to reach out.”

She’s at @whitneykayscott, and as of early April, she had 12,400 followers.

Her husband now works in his family’s business. Her children include her daughter Brielle, 10, and  son Jojo, 6. Whitney loves to ride horses and does so frequently, often with her daughter. She finds being on horseback highly therapeutic.

She said she was excited when she passed on the crown to a new woman. That part of her life is over. But, she said, she won’t stop speaking up about mental health. That’s a mission she’ll continue as long as the Lord leads her to do so.