Seven Springs Ranch: It All Started With a Heart Attack 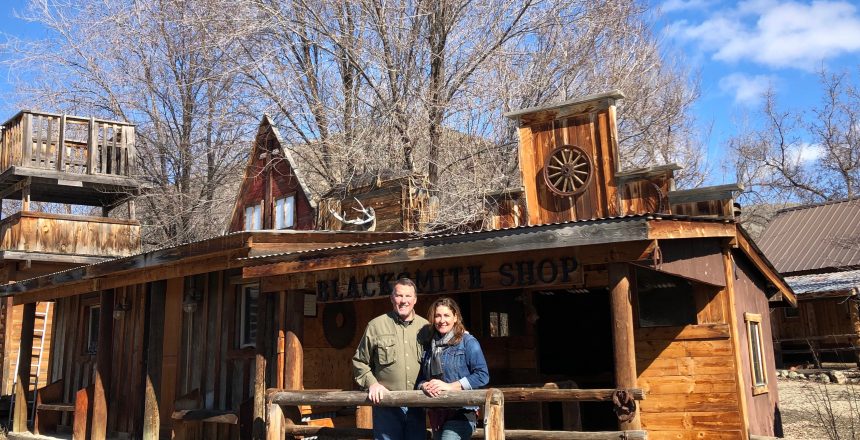 Tim and Julie Campbell stand near a building on the property in Emmett they call Seven Springs Ranch. (Courtesy photo)

Tim and Julie Campbell’s venture in the hills above Emmett all started with a heart attack — Tim’s heart attack to be specific. He asked a number of times, “Why me?” The surprising thing is, he wasn’t asking why he suffered an almost-fatal health crisis but, rather, why he survived it.

Tim didn’t see himself as a good enough Christian, worthy of God’s intervention on his behalf. Though he was saved and walking with the Lord, he admits, “I never read the Bible. I just went to church.” And initially, he pretty much went to church just to see Julie.

His heart failure occurred in 2017 in Southern California, where the Campbells lived. Tim was 56 at the time and got no advance warning from his body telling him his primary organ was about to go haywire. According to the Campbells, Tim’s heart stopped beating for 90 minutes; and during that time, two important things were happening. The medical personnel at the hospital where he was taken kept trying desperately to get his heart going again — to the extent they became exhausted.

“The staff were giving up; they were tired,” Julie said.

The other thing that was happening were prayers being offered up to God that Tim might pull through. Supplications were being prayed by church members; Tim’s fellowship, Band of Brothers; Julie‘s fellowship, Hearts of Beauty; relentlessly by Julie herself; and by prayer warriors Julie got hold of on the phone. If prayers ascending to heaven made any sort of sound, that would have been a very noisy hospital. But nonetheless the physicians felt limited by the facts of medical science.

“Doctors told me that Tim wasn’t going to make it; they said they could give me no hope. The head cardiologist said that even though they had gotten a stint into his heart, he was not optimistic. He said that Tim’s lungs were full of fluid, his kidneys and liver were shutting down and he didn’t think he had any brain function. … He said that Tim most likely wouldn’t make it through the night; and if he did, he probably wouldn’t be able to walk, talk or feed himself,” Julie said.

But Tim made it.

“A day and a half after the heart attack, Tim was sitting up in bed with nothing more than a little oxygen into his nose, communicating beautifully and laughing,” his wife said.

That’s when Tim’s “why me” questions began. He wasn’t impressed with himself as a Christian — certainly there were others more deserving of being brought back from the brink of death than him. His pastor told him, “This is not about you. This is about God, showing this world that He is still here, He is sovereign, and miracles still happen.”

The pastor added, “God just needed someone big enough, strong enough, and dumb enough to withstand what God was going to put you through.”

All of them felt Tim had been spared for a reason, that God had something in mind for him, and for Julie. While no one at the time was certain what that might be, the couple mutually agreed they would be ready to act in obedience to whatever plan God had in mind.

Tim did not come out of his medical trauma unscathed. In trying to revive him, the EMTs “broke everything: all of his ribs, his collarbone, and a fractured sternum,” the couple said. He spent time recovering, and because of his illness and injuries, he was out of work. Julie was teaching art and substituting part-time, and there was not much money in the family budget. “We had zero dollars in our account too many times,” Tim said.

During this time, Tim experienced a recurring vision, sometimes in his mind while awake and at other times in his nightly dreams. The vision was of a piece of property where people were gathering, and there was a rock fireplace and a soaking pool — like amenities in a guest facility.

The recurring vision motivated the couple to take day trips to view properties in states nearby to their then-Southern California location, in an attempt to find in reality the place Tim kept seeing in visions. They have friends in Eagle who are real estate agents; the Campbells came up to stay with them, and the couple showed them a listing the Campbells thought sounded “too good to be true… and it had been on the market for 450 days.” The property was located on East Black Canyon Highway in Emmett.

The 57-acre site came complete with a number of structures, and a hill. Tim said, “It was like a hill I saw in my vision.”

Perhaps this was where God was leading them?

The Campbells decided that, yes, the Emmett property was the one they’d searched for. They met the owners, Dick and Holly Smith. Dick is in his 80s, and Holly is about 15 or so years younger. They are both Christians. “Their kids prayed to have a Christian couple buy their place and continue the vision,” the Campbells said. The Smiths had run S Bar S Ranch on the site — an old-fashioned, Western-style place for people to gather. The Smiths’ enterprise matched the Campbells’ faith-inspired dreams.

Next came the mechanics of agreeing on a financial transaction and lining up the funding. Dick and Holly agreed to carry half the note (loan). But even at that, it was still a big financial commitment. “Bear in mind,” said Julie, “we had no money.”

She said the Holy Spirit would ask her, “Do you trust Me, Julie?” and then remind her of all the things He’d brought them through, including Tim’s health scare.

Tim said: “God put on my heart Hebrews 11 — ‘Now faith is confidence in what we hope for and assurance about what we do not see…’”

The full price for the property was $500,000, and the Campbells needed to come up with half of that right off. They started seeking a partner or partners. At one point, they thought some friends were going to partner with them, but the friends had to pull out at the last minute. In the meantime, the Campbells had sold their California home and had everything all packed up for a move to Emmett. They now had 30 days to come up with the money. Together, they sat in an empty house, boxes packed, and consoled one another with “God’s got this.”

Said Julie: “Right then, we were more on our knees than on our feet. We had nothing but Jesus.”

In 30 days, a group of like-minded investors — a total of 7 people — came together, and the purchase of Seven Springs Ranch in Emmett became a reality. Tim and Dick settled it all with a handshake.

Originally, the property was held as a corporation but is now a 501(c)(3) non-profit. Tim and Julie live full-time on the site and are working hard every day to create a place in line with what God has laid on their hearts. Their ultimate goal is to have a warm and welcoming Christian event and guest ranch, and even though much work remains to be done, they’ve already hosted a wedding, youth groups, and a cowboy camp with Blaine and Molly Lilly of Church in the Dirt in Homedale.

They said every time they have a problem, “God brings grace out of it.” And they’ve had plenty of problems. For instance, Tim was injured in a vehicle crash and has an area on his face that clearly took the brunt of the accident. But again, the seemingly invincible Tim Campbell is recovering and continuing to build Seven Springs Ranch into the place he conceptualized with God’s help.

Walk around the acreage with Tim and he details the plans he has for the property — which seem daunting. Asked if naysayers tell him it’s too much to achieve, he answers, “Yes, all the time.” But he and his wife carry on in faith.

In their previous lives, the Campbells gained a lot of experience in various capacities, such as construction and catering, and they’ve both run big corporations. It’s all been leading up to Seven Springs Ranch, and they couldn’t be happier with where they’re at. Tim said, “Julie likes to say, ‘It feels like we’re 100 miles from nowhere but we’re 10 minutes from the supermarket.’”

“I feel God everywhere on this ranch,” Julie said.