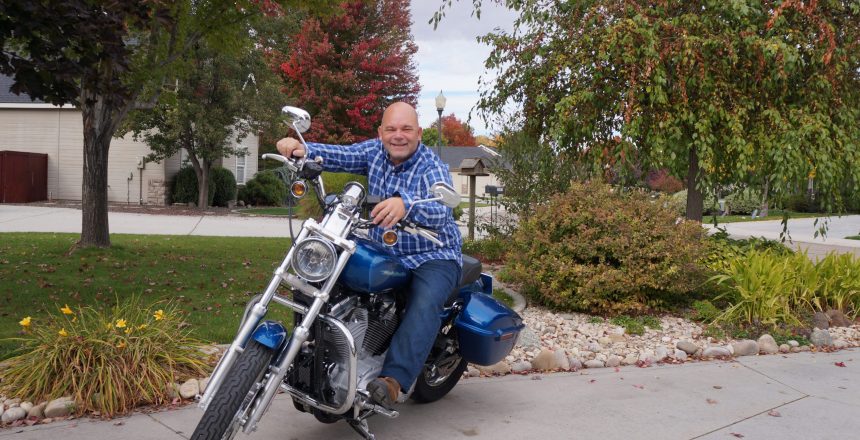 Rick Chromey has a lot to be thankful for and doesn’t hold back on praising his Savior. Despite the typical ups and downs of life, he’s remained a committed Christian since his childhood. (Photo by Steve Jones)

Rick Chromey is evidence that no matter where you start out in life, it doesn’t need to define where you end up.

It was a long path that led Chromey to his current calling. By his own description, he lived an interesting childhood. But anyone hearing about his younger years might choose a different word than “interesting” to describe Chromey’s experiences. “I was born in Lewistown, Montana. We were lower middle class and lived on the edge of poverty. My dad was a trucker, and my mom was a stay-at-home mom,” Chromey said, as he launched into his life story. He added, “Mom kept us in church.”

If it all sounds like a pretty fortuitous upbringing, hold off on that assumption for a bit.

“At one point my mom descended into drug and alcohol abuse and ran off with a guy,” Chromey said. “She abandoned us kids, and we didn’t know where she was for a long time. After about 6 months, she resurfaced in Houston, Texas.”

Chromey went through some tough years growing up – he was only 12 when his mom left. Credit goes to his grandparents for stepping up when he needed them.

“My grandmother was a great person and a wonderful Christian,” Chromey said, also praising his grandfather as a positive influence. “I grew up in church because of my grandparents.”

Many years of his life are defined by a phone conversation he once had with his mother. “Mom called one Easter Sunday to say ‘I love you and care about you’; I got on the phone and said, ‘I hate you and will until I die,’ and hung up the phone,” Chromey said. “I had a chip on my shoulder; I was an angry, bitter adolescent. Most people saw me as a talented, accomplished, GOOD church kid growing up. Few knew of my inner pain and private struggles.”

Today, Chromey is a man with a doctorate, a published author, and well-traveled. But let’s backtrack a little to explore how he got there.

“I graduated from high school and poured my energies into finding who I was,” Chromey said. He discovered he was a theater buff, for one thing. He started acting during his sophomore year and felt very comfortable onstage. “I was a part, a personality, and people laughed,” he said.

The creativity in speech and theater were a godsend to the young Chromey, allowing him positive outlets for self-expression. Though only 5’4”, he also played football. Initially, he confesses, it was because he wanted to hit somebody. But a JV coach believed in him and worked to turn him into an athlete.

That coach was not the only positive school influence on Chromey.

“I was socially reclusive at first, but I had several teachers who ‘saw who Rick was’. Mom put that frame around my life. I had a kindergarten teacher, Mrs. Hruska, who told my mom I was creative, passionate, and energetic,” Chromey said, admitting maybe Mrs. Hruska just said that to all the parents about their kids. Didn’t matter. His mother took those words to heart and reinforced them in her son, frequently telling him he was all those things: creative, passionate, and energetic. (And, yes, this is the same mother who eventually left home without saying so much as a goodbye.)

After high school graduation, Chromey went off to Nebraska Christian College. “Grandma wanted one grandson to go to Bible college. I went because it made her happy,” he said. He’d had a full-ride scholarship to attend a university and major in theater, but he passed on that to go to NCC.

The bad news by his own admission was that his grades were terrible. The good news was that he was able to join a drama group at NCC called Christ & Co. “I was a good theater guy; I was a good person – compliant.”

Christ & Co. performed in churches, especially for youth groups. When he returned to NCC for his second year, he started studying youth ministry. Between 1987 and 1991, he had ministries in Ohio, Kansas, and Missouri.

Chromey briefly attended Cincinnati Bible College and Seminary to work toward a master’s degree in Christian education. “In 1991, I went back to finish it,” he said. “I attended CBC&S full-time in 1986-87, then dropped out to take a full-time youth ministry in Cincinnati (Madeira Church of Christ). I moved away from Cincinnati to Kansas and later Missouri. I took a few grad classes over this time, but it wasn’t until I burned out in the spring of 1991 that I decided to finish that degree (I only had about 16 credits left to do).”

By then, he was married with a family. “Unfortunately,” he said, “to finish full-time it was best to move my wife and daughter to her parents’ home in State College, Pennsylvania and then drive to Cincinnati for the fall 1991 semester.”

Then, one day, “I saw a little thing about a school in Boise looking for a Christian education teacher,” he said.

The school was Boise Bible College; he applied and got the job. He was hired in 1992 and stayed to 1998. While there, he helped develop the Christian education degree curriculum. “We taught people how to be Sunday School teachers, and taught youth and children’s ministries,” he said.

Not surprisingly, he noticed a creative void at the school – in drama.

“We needed a drama group; there were lots of singing groups but no drama group,” he said. Along with others, he launched the Living Christ Players and, together, they performed all over the Northwest.

“I taught at BBC from 1992-1998, then moved to teach Christian education and youth ministry at Saint Louis Christian College (1998-2003) and later moved to Kentucky Christian University to teach youth and family ministry (2003-2007). It was while I was at KCU that I started my doctorate at George Fox Evangelical Seminary (2004-2007). I graduated in 2007 and then took a job with George Fox University-Boise. That’s what brought me back to the area. I had been away from Boise from 1998-2007, my longest time away,” he said.

But due to some extenuating circumstances, the job didn’t work out. Chromey was out of work and suddenly found new opportunities difficult to come by due to the so-called Great Recession.

“My dream all along had been to write and speak,” so that’s what he started to do. He’s written a number of books over the years, as well as delivered more than 3,000 professional presentations for churches, schools and businesses. His latest book is titled “GenTech” and is billed as “an American story of technology, change, and who we really are.”

In 2013, when he turned 50, he decided it would be like the Old Testament Year of Jubilee. He told the Lord, “I’ll go anywhere you send me – no restrictions,” and 3 weeks later, the president of an organization named Kidz at Heart International called. Kidz at Heart is a ministry aimed at children, with the goal of training family leaders and church workers how to effectively reach and teach kids for Christ.

Chromey was recruited as a trainer. He laughs as he relates this part of his life because he had at one point set 3 conditions on the Lord for what he would and wouldn’t do in His service. One of those conditions was “no cross-cultural missions work.” But soon, as a trainer with Kidz at Heart, he was on his way to Africa to equip and instruct teachers and leaders. Ultimately, he was able to say of his international missions, “I loved it.” He got to visit three continents and six foreign countries, seeing and experiencing many new things.

The narrative then switches to the collapse of his 30-year marriage, as well as attendance at Celebrate Recovery for personal reasons. Steps in his recovery process included forgiveness and making amends. He needed to come to terms with the fact he’d never forgiven his parents for, as he puts it, “the hurt my mom caused and the rejection issues from my dad.”

At one point in his life he had told his mother, “I will care for your needs, but you’ll never hear me say, ‘I love you, Mom.’… It broke her heart; and I knew it would break her heart, and that’s why I said it.”

But on Mother’s Day 2015, he called the woman who had given him life. It had to be a phone call, he said; a letter wasn’t good enough, and it was nothing like the phone call he’d had with her years prior. When his mother came on the line, he told her it was time to release her from the anger and loathing he’d had for her. “I said, ‘I love you, Mom.’ I felt silence at first, and then crying. Mom crying. I felt a chain fall off my life,” Chromey said. “The following December, she passed away.”

He also communicated with his dad. They’d had no relationship for 30 years; but they reconciled, and to this day, his dad always says “I love you” when they end a conversation.

In 2015, he married a woman named Linda that he met through eHarmony, saying the year they wed was the happiest of his life.

He worked with Kidz at Heart for 18 months beginning in 2014 but then felt God telling him, “I want you to do something different.” That’s when plans for his current undertaking, MANNA! Educational Services International, got rolling. In 2017, MANNA! launched as a one-of-a-kind  ministry.

“We want to be different from your average training company,” Chromey said, describing the organization as interactive, experiential, and “kind of like a show,” perhaps harkening back to his theater roots. “I’ve been with MANNA! for 3 years, and it’s been a wonderful ride.”

He has most recently been working on MANNA! Life Groups. “These are home fellowships built around an Acts 2:42 frame (Bible study, fellowship, prayer and the Lord’s supper/communion). We are ‘biblical communities for the spiritually curious,’” Chromey said. “We purposely capitalize MANNA with an exclamation point because our business is serendipity and blessing. Surprise! Be blessed!”

Clearly, Rick Chromey is still using his creativity for good. He’s using it for the light side, and the Light of the World is using him.