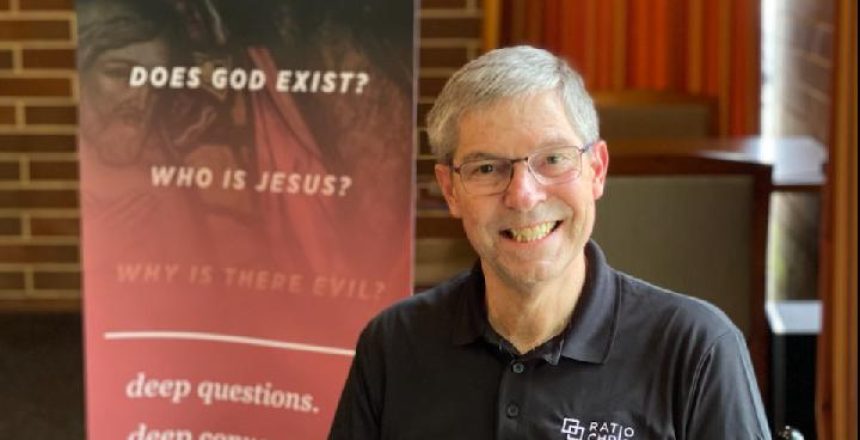 Michael Oswold is director of Ratio Christi on the Boise State campus and was pivotal in getting the BSU chapter started. (Courtesy photo)

Are intellectualism and faith two mutually exclusive concepts? Not according to Ratio Christi, a faith-based group that launched a chapter on the Boise State University campus in 2021.

The term is Latin for “The Reason of Christ.” Ratio Christi began in Lincoln, Neb., in 2018 on the University of Nebraska campus, with the goal of equipping students to respond with intellectual skill  to questions posed to them by other students about their belief in God. Ratio Christi is primarily about two things: apologetics and evangelism.

With college campuses being hot spots of thought, learning, discourse, and exploration, it seemed fitting to the founders of Ratio Christi to approach the topic of faith with historical, philosophical, and scientific reasons for following Jesus Christ, and, with that, to draw people to a personal relationship with Him.

Michael Oswold was pivotal in starting the local chapter of Ratio Christi – the first in the Gem State – and has been crucial to its growth on the BSU campus. He explained: “A year and a half ago, I was sitting quietly, asking God what He wanted me to do; I’ve spent 40 years as a lawyer. … I was kind of like Noah, waiting 40 years to figure out what I should be doing.”

He was raised in a Christian home in San Luis Obispo, Calif., and moved around a bit throughout his years in the Golden State. Five years ago, his son Ryan came to Boise and called his father to share that apologetics was “making an intellectual case for [Christian theology].” Ryan sent his father a book by Frank Turek titled, “I Don’t Have Enough Faith to be an Atheist.” Turek is an author, speaker, and radio host well known as a source for Christian apologetics.

The senior Oswold was captivated by the book and applied to receive advanced training at the Cross Examined Instructor Academy in Dallas in 2018. There, he met some trainers who had a profound effect on his understanding of an intellectual defense of the Christian religion. Two of those trainers were Sean McDowell, Ph.D., and J. Warner Wallace. Wallace was especially engaging, as he had been a cold case homicide detective – and an atheist – for 35 years. He literally used his law enforcement  skills to come to a belief in Jesus, His death, and His resurrection. He said he ferreted out compelling evidence through Bible study, including evaluation of the New Testament and its many separate eyewitness accounts of the Man from Galilee, to bolster a belief in the Savior.

“He went from a mean-spirited skeptic to earning a seminary degree,” Oswold said of his apologetics mentor.

Following training, Oswold felt called to campus ministry. He applied to open a Ratio Christi chapter at BSU in the month of January, and by April, he was taking support-raising training to reach out to people who could help make the vision a reality. The chapter formed, and Oswold was named to serve as its director.

Roughly 6-12 students are currently involved with the BSU Ratio Christi chapter. It takes nothing away from other campus ministries such as Cru (formerly Campus Crusade for Christ). “There’s a lot of good campus ministries doing evangelism,” Oswold said. “We’re filling a niche. Cru and us get along fabulously.”

Both are part of the Campus Ministers Association at the Biblical Studies Center at 1025 Belmont St. near the Boise State campus. Bill Pubols is executive director at the center. “Bill does a wonderful job of helping us see ourselves as co-laborers in the vineyard,” Oswold said.

Some of the tough topics Ratio Christi takes on are such ideas as the notion God is not actually good or loving because He allows so much wickedness to flourish in the world. “People say, ‘God is evil’, and we offer counter-arguments to that view. … We create a safe space for people to come and talk about that. They are actually allowed to come and talk about anything – from homosexuality, transgenderism, whatever,” said Oswold.

A statement on the Ratio Christi website at www.ratiochristi.org reads: “On the university campus, the person with the most credentials is seen as the most credible. A Ph.D. philosophy student tends to ignore the wisdom of anyone who has less education than they do. To effectively evangelize on the college campus, the Church needs to send people with advanced education and advanced compassion. Only Ratio Christi team members are specially trained to evangelize and minister to these difficult cases.”

The organization encourages its members to be well informed and highly educated. For the current school year, the chapter president is a pre-law student; the vice president is a Ph.D. student in biomedical engineering; and the secretary is a biology major. This helps the organization meet the challenge of what Oswold referred to as “credential skeptics.”

Why does Ratio Christi emphasize evangelism as well as defense of the faith? Another statement  from its website answers that question: “Winning an argument with apologetics is useless without being able to share the good news of Jesus Christ. Our team members have a heart to share the gospel. We want to live out the Great Commission.”

All things campus-related were up and running again by mid-August following the summer break, and that includes Ratio Christi meetings.

Oswold hosts “friendly discussions” on apologetics and related subjects from 2 to 3 p.m. Wednesdays at the Biblical Studies Center. He may be reached at [email protected] or (208) 914-3086. For more information, go to https://ratiochristi.org/chapter/boise-state-university/.