Others Need Us: Why Aren’t We Sharing the Gospel? 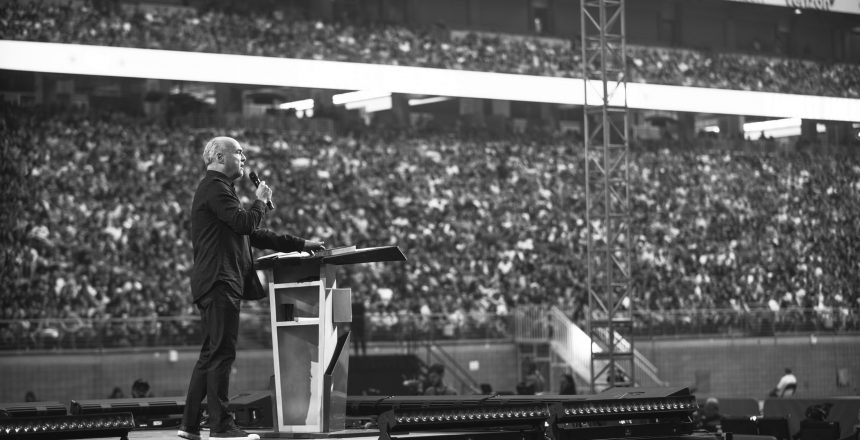 Pastor, evangelist, author and radio show host, Greg Laurie, speaks to a crowd during one of his well-attended ‘crusades’. He is coming to Boise in early May for a Harvest Boise event. (Courtesy photo)

It’s funny how teenagers can be too busy to clean their rooms or take out the trash, but if something comes along that they want to do, they suddenly and mysteriously have time in their schedules.

It’s all about motivation. If we don’t have the motivation to do something, we aren’t going to do anything.

The same is true when it comes to reaching out to others with the gospel. We may know it’s what we should do (just like teenagers know they should clean their rooms), but we offer up excuses as to why we can’t or don’t. Behind the excuses, there are some real issues to address.

But the other bridesmaids answered, “We don’t have enough. … Go to a shop and buy some for yourselves” (verse 9). Essentially they were saying, “That isn’t our concern. We’re set. We’re happy. Work out your own problems.”

Quite honestly, that is the way many people in the church feel. Talking about the need for evangelism is of no consequence if we lack one simple thing: a compassionate heart for nonbelievers.

That is not how Elijah was, however. When we are first introduced to him in 1 Kings 17:1, he explodes onto the scene, telling King Ahab, “As the Lord God of Israel lives, before whom I stand, there shall not be dew nor rain these years, except at my word.”

There was Elijah, storming boldly into the court of the notoriously wicked Ahab and flinging down the gauntlet of his challenge like he owned the place. They probably wondered how he got through security.

Where did Elijah get such boldness? Notice his interesting expression: “As the Lord God of Israel lives, before whom I stand…” Wherever Elijah went, he recognized that he was in the Lord’s presence — that God was with him. Elijah served a living God — not a dead one like the god of King Ahab.

Jesus said, “I will never leave you nor forsake you” (Hebrews 13:5). As believers, we are never alone. We automatically become a majority of one because God is with us.

This awareness of God’s presence gave Elijah the courage to do what God called him to do. And God is still looking for men and women today who will stand up for what is true and will carry His message. Are you willing?

Later, the Christian thinks, “Boy, I really blew them out of the water when they said this and that. Wasn’t that great?” No, it wasn’t great. In reality, it was quite stupid, because our job is not to win the argument; it’s to win the soul.

If we want to effectively share the gospel with people, then we need to engage them. What did the master evangelist Jesus do as He talked with the woman at the well in Samaria? He engaged her in conversation. It was give-and-take. He spoke, and then He listened. She shared her heart with Him, and He revealed truth to her.

When we share the gospel with people, it is a dialogue — not a monologue. It is not just talking; it is also listening. It is offering the appropriate passages from Scripture and statements from a heart filled with love so that a person can come to believe in Jesus Christ.

No one ever will be argued into the kingdom of God. They are going to believe because the Holy Spirit convicts them of their sin. Our job is to simply bring them the essential gospel message, with discernment and tact.

We overcomplicate this thing called evangelism. So, let’s bring it down to the basics: who, where, why, and when.

Who is called to “Go into all the world and preach the gospel”? Answer: We are.

Matthew 28:19–20 says, “Go therefore and make disciples of all the nations, baptizing them in the name of the Father and of the Son and of the Holy Spirit.” These words are addressed to everyone — not just pastors, evangelists, and missionaries, but everyone. In the original language, they are a command. You are commanded by the Lord Himself to do this. No exceptions.

Where are we to preach the gospel? Answer: Everywhere!

Jesus did not say, “Go and be a good example” but “Go and preach the gospel.” Some say, “I don’t want to push anything on people!” Would it be “pushing” something if you had a cure for cancer? We have the answer to life’s questions; we should be proclaiming it everywhere!

Why are we to preach the gospel? Answer: Because God’s primary way of reaching people is through people! “For since, in the wisdom of God, the world through wisdom did not know God, it pleased God through the foolishness of the message preached to save those who believe” (1 Corinthians 1:21).

But there is another reason as well: Because we care. We don’t want to see people go to Hell!

When are we to do it? Answer: All the time!

We must always be open to the leading of the Holy Spirit. You never know when the door of opportunity will open. “Preach the word of God. Be persistent, whether the time is favorable or not” (2 Timothy 4:2). Another translation says, “Be on duty at all times.” And 1 Peter 3:15 tells us, “Always be prepared to give an answer to everyone who asks you to give the reason for the hope that you have. But do this with gentleness and respect.”

If you are one of those people who has been making excuses (like that teenager who doesn’t clean his room), I’ve got the perfect opportunity for you to get your feet wet. Why not start by inviting someone to the Boise Harvest, happening May 1–3? It’s a fantastic opportunity to hear some great music and a message about the meaning of life in a positive, non-threatening environment. Who knows? They may just say yes and have their lives changed forever.

Details for the event may be found at boise.harvest.org.

Greg Laurie is the senior pastor of Harvest Christian Fellowship, with campuses in California and Hawaii. In 1990, he began holding large-scale public evangelistic events called Harvest Crusades. Since that time, in-person attendance and live webcast views for these events have totaled more than 9.4 million, with 520,183 people deciding to make a profession of faith in Jesus Christ. He has a nationally syndicated radio program and has written more than 70 books. For more information, go to harvest.org. Listen to Greg’s radio program, A New Beginning, weekdays at 3:30pm MST on KBXL 94.1 The Voice, or by going to 941thevoice.com