Maureen Cottrill The Deep Faith of a British War Bride 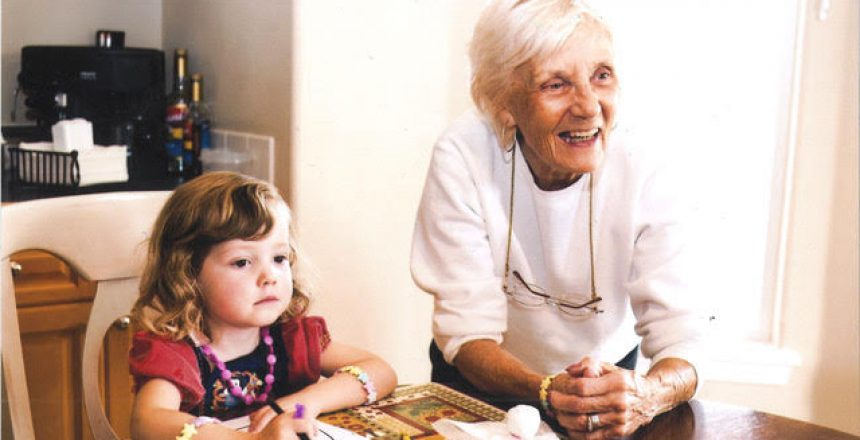 There were many times in Maureen Cottrill’s* life when she found herself alone, pleading with God to protect her, to keep her safe. Safe from bombs being dropped while she hunkered down in air-raid shelters. Safe as she’s left mostly all alone in a foreign land where people don’t want her. Safe as she wonders how her finances will allow her to support two young boys while surviving a tumultuous marriage.

And through it all, God loved her. God protected her. God kept her on the path He had planned.

Maureen’s story began in Northenden, a small village in England. She was the youngest of 10. At five-foot-one inch and less than 100 pounds, this still spry and feisty woman said “shy” has never been in her vocabulary.

When she was 5, her mom enrolled her in ballroom dancing. “Mom put me in dance school so that she could do all her shopping while I danced. She said it was a good way to get rid of me because I knew everyone and I had to talk to everyone at every store, slowing her down.”

Maureen was raised a Catholic, going to mass every Wednesday and Sunday and attending Saint Adans Catholic School.

Then came World War II. And life changed. Most notably air raids and air-raid shelters became the norm for every family. As German aircraft invaded British skies, sirens sounded and people rushed to their shelters.

Maureen explained that once sheltered, fear crept in. “We would say ‘Please, Lord, don’t let it be us. Don’t let it be us.’ We knew they were going to drop those bombs and we didn’t know if they would land on us or in a field.”

Maureen said that, at first it was terrifying, but then became a normal way of life. “Once they bombed our church and cemetery. Going to school we walked right past the site. We saw body parts scattered around. I was just a kid and the first few times it really scared me. After awhile, though, we were still upset but it wasn’t such a shock.

“One time as I was coming home from school, the air raid siren started going off. I started running like crazy because I didn’t want to be in somebody else’s shelter or in the field on my own. I thought my mom or somebody would be there. But no one was. So I put my gas mask on. I couldn’t do anything but sit and wait. Every time the Nazi’s would fly over I would just say, ‘Please Jesus, don’t let it land on me.’ One bomb finally did land in a big field close to me.”

The aftershock knocked down part of Maureen’s house, causing bricks to fall on top of the shelter which, in turn, caused dirt to pour in. Maureen was sitting on the bottom bunk when the top bunk fell and pinned her hands onto her legs.

“Finally, I can hear people outside and I hear the all-clear siren. I’m thinking I’m going to be buried and no one knows that I am here. And there’s a lot of dirt coming in. Finally I heard my mom yelling and asking if I’m okay. I yelled, ‘Yeah, but there’s dirt coming in and there’s spiders.’ Daddy longlegs were crawling all over me and I couldn’t brush them off because my arms were stuck,” Maureen said, shuddering at the memories.

Schools also had fallout shelters. “When we heard the sirens, we would grab a pencil, paper and gas mask. The teachers had three or four candles. They would light one and try to teach, or we could draw, anything to keep our mind off what was happening. But after so long, we had to extinguish the candle because we didn’t know how long the bombing would last.”

One favorite memory from being in the shelter was the can filled with candy that village folks donated. “When it got really bad outside they would start passing around the can of candy. Of course, it was to distract us from what was happening.” Because of all the war rations, though, the candy was a real treat.

Her dance training led Maureen to become a formal dance instructor after the war. It also lead her to being crowned the “M/CR RAFA Branch Battle of Britain Queen 1950.” As part of her queen duties, she attended functions for Royal Air Force recruitment and other community events.

While an instructor, Maureen met and became competition dance partners with a young American airman. They later married and her husband received military orders to return stateside. Maureen was one of a half-dozen or so “war brides” to be transported via ship to the USA.

When they boarded, all the men were led one way. The women and children went another way, down to the bottom deck of the ship. That was the beginning of a nine-day voyage across the Atlantic Ocean that landed Maureen at Ellis Island. At the end of that long journey, the women were allowed on the top deck to see the Statue of Liberty. Sadly, Maureen only recalls feeling alone. And afraid.

The beginning of Maureen’s life in the United States of America was anything but a dream. The English ladies were met with sneers of “Go home. Why don’t you go back?”

“I just remember thinking, ‘What have we done?’”

After the marriage ended in divorce, Maureen found herself alone with two sons, Chip and Mark. Those years when they were on their own, Maureen said she “Called on the Lord so much. At night I would pray, ‘I don’t want riches, Lord. I don’t want to be famous. I just want to stay healthy so I can take care of my boys because there’s no one else that wants them. Please take care of us.’”

Maureen’s life finally settled into a routine. Going to work at the Post Exchange (Barksdale AFB, Louisiana) and going to church on Sundays. “I went to a Presbyterian church because there was no Catholic church nearby.”

The first Sunday the young family was unsure of how to act in this different church environment. Maureen went with the boys when the children were invited to go to the nursery. The ladies in the classroom invited her to stay until she felt comfortable.

“They made me feel at home. It was like they had put their arms around me and said, ‘You belong to us.’”

Finally, she said, she felt liked she belonged. Right where she was. In the USA. In the Presbyterian church. “I knew it was God saying, ‘Welcome Home.’”

Around this time, Maureen met a young airman, Darryl McCrory. They discovered a love of reading and they enjoyed talking about books. One Sunday, Darryl spotted Maureen walking to church across from the Baptist church he attended. “I went to that church because it was within walking distance for me and the boys because I didn’t have a car. Darryl would see me and wave. One Sunday morning after church he was waiting for me.” That began a weekly pattern of Darryl taking the trio to and from church.

A romance was blooming for Darryl. “He was such a sweet guy. A Christian. I trusted him, and my boys liked him. But…”

There was one problem. Because Darryl was younger, Maureen put all prospect of a relationship with him out of mind. “I couldn’t saddle this young man with two boys. It wasn’t fair to him.”

Darryl was undaunted by the age factor. Finally, Maureen told him, “If I’m going to even consider marrying you I have to let your family meet me and my boys. I don’t want them thinking that I’m taking advantage of you or that I must marry you. So we went to see his family in Mobile, Alabama.”

Maureen’s concerns were put to rest when his family enthusiastically welcomed her with open arms.

“His grandmother (Darryl was raised by her after his mother died when he was young) was so sweet. She hugged Darryl’s neck and gave him a kiss, then she told Darryl to get out of the way. ‘I want to see my new daughter-in-law and my new grand-babies,’ she said. Then she gave me the biggest kiss and hug. I was introduced to the rest of family and they made me feel so good. They were a big Christian family.”

The McCrory’s have been married 53 years. They moved west to Nampa, Idaho in 1971. Together they had two daughters, Michelle and Toni, and 12 grandchildren.

Their faith was tested when grandson Ethan was born with only half a heart and autism. A doctor had told the family he didn’t think Ethan would ever walk. Then one Sunday at church Ethan became fussy so Michelle and Darryl took him out to the foyer. “That little guy stood up with no help and walked from one end of the foyer to the other,” Maureen said. “It was a miracle.”

As she reflected on the eight decades of her life, tears filled Maureen’s eyes. “The Lord has been so good to me. He brought me through so much.”