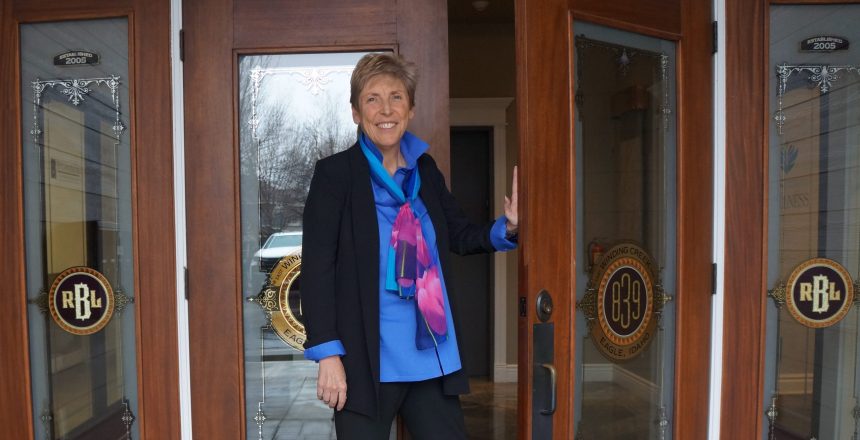 Many Treasure Valley residents know Maryanna Young from her years as CEO of Aloha Publishing, where she guided the publication of 408 books since founding the business in 2010. But just as many people may be unaware of how varied her skills are, or of the other careers she’s held – all in their own way leading to the launch of Aloha.

Maryanna grew up in a Christian home in Boise, graduated from Boise High School in 1982, and went off to Tulsa, Okla. to attend Oral Roberts University on an athletic scholarship. She excelled in both track and basketball and graduated in 1986 with degrees in exercise physiology and physical education. While there, she was named the Outstanding Female Athlete of her graduating class and, later, coached at ORU.

Her athletic ability took her around the world, for both playing sports and coaching them. Some of her globetrotting adventures were spurred by skills in a sport called korfball, a co-ed game that requires a ball and a netless basket on a high pole. Her korfball prowess took her to Holland, Belgium, Australia, and other countries. She made countless friends during her travels, many of whom were athletes. In 1995 she took the opportunity to start Fitness Management Group, a sports agency that worked with under-represented Olympic and Paralympic athletes, partnering with brands and organizations.

During her years as a sports agent, she represented athletes through three Olympic Games: Atlanta, 1996; Sydney, 2000; and Salt Lake City, 2002. Among her many clients were medalists who needed advice on how to turn their Olympic opportunities into business success, while at the same time living within the values of perseverance, overcoming and achievement. They also needed help obtaining, understanding, and negotiating contracts for sponsorships, speaking, and media advertising placements.

Maryanna soon began specializing in Paralympic athletes. The Paralympics began in near-obscurity in 1960; but today, while still not receiving the same degree of TV coverage as the Olympics, competition between people with assorted physical disabilities has earned a spot on the world stage. Maryanna played a part in making sure Paralympic athletes had the same opportunities and exposure as Olympic athletes.

In October of 1995, Maryanna met Jean Driscoll at a speaking event. Jean was a wheelchair racer who became a five-time Paralympic gold medalist, marathon world record holder, and eight-time winner of the Boston Marathon in the wheelchair division.The pair got together to talk about representation and sponsorships; at the end of their meeting, Maryanna asked Jean, “May I pray with you?”

Jean later told Maryanna that her personal thoughts at the time had been, “The first [potential] agent who says, ‘Can we pray about it?’ will be my agent.” Maryanna secured a client and Jean found her first sports representative.

Maryanna set about working to line Jean up with endorsements but was turned down by her first choice: a popular shoe and apparel brand. “That fired me up,” Maryanna said. She pitched ideas to other companies and, eventually, Ocean Spray said yes. The tagline Crave the Wave became a well-known 1990s Ocean Spray product slogan, and Jean figured prominently in its multi-year campaigns. Soon she was featured on the front page of USA Today and in the year she retired was named the Godmother of the Royal Caribbean mega ship Mariner of the Seas, a first ever for a Paralympic athlete.

Another prominent athlete she represented was Sarah Will, Olympic & Paralympic Hall of Fame member, Class of 2009. The most decorated athlete in U.S. Paralympic Alpine Skiing Team history, Sarah won 13 Paralympic medals in 10 years of competitive skiing (from www.teamusa.org). General Motors was her main sponsor. She also represented Craig Blanchette, a double amputee who competed in the 1,500-meter wheelchair demonstration event at the 1988 Seoul Olympics; he later won multiple world championships in wheelchair racing (from olympedia.org). Gateway Computers was a main sponsor.

During that time, she also helped athletes and others find book deals and later became a publishing consultant and executive business coach. Working to help others find avenues to publish their books and share their expertise became a hobby for her. Then, in 2010, she was asked to help organize and participate in the Idaho Book Extravaganza, an event for people not just interested in reading books but also in writing them. The event was a hit. “People were waiting two to three hours in line to pitch ideas,” she said. “Thousands of people showed up.”

Seeing the overwhelming interest in publishing spurred Maryanna to open Aloha Publishing. The name was chosen because of what the Hawaiian word “aloha” represents: hospitality, acceptance, and grace. The business is a hybrid publisher that works primarily with CEOs, business owners, and executives publishing their business and leadership development books.

Maryanna has dyslexia, a learning disorder that can cause reading difficulties. She wasn’t diagnosed with it until her final year in college, but she uses it to her advantage – especially in the sphere of publishing. “As a dyslexic, I came up with a [writing] system for non-writers. Over 30% of our clients have some form of dyslexia,” she said.

She is a prolific reader and writer – she wrote her first book at age 40 – as well as a voracious learner. She stated that, more than stumbling through the challenges of dyslexia, the disorder instills a higher sense of vision and clarity in her when it comes to sizable goals and ways to achieve them.

“It’s a vision thing,” she said. “I have vision and clarity about the big picture for every project.”

Heather Goetter, who works with Maryanna at Aloha, said: “She uses her dyslexia as a gift. She catches others’ visions and imparts her vision as well to her clients. She’s a promoter of people, and she wants to take them to the next level – not just in their books and writing, but in life. Nothing holds her back. She’s not afraid of failure, and she’s very innovative.”

She publishes books by authors from as far away as Germany and by authors close to home, such as Skip Hall and Jim Zamzow; and the books have covered topics from business to faith.

Her background imparted to her both a lifelong belief in God and an enterprising spirit. “I come from an incredible family,” she said.

Her grandfather was Carl Oppel, who started and ran Oppel Harvester in the Gem State.

“My parents were great about living their faith, and my grandparents as well,” she said, further stating they all ran their businesses the way they lived their lives: with solid Christian values.

Her favorite Scripture, Ephesians 3:20, reads: “Now to him who is able to do immeasurably more than all we ask or imagine, according to his power that is at work within us…”

Her guiding principle is: “No matter what’s in front of you, just keep running with it and find a way to get it done.”

Tenacity is part of her makeup, but she doesn’t take credit for it. “God has given me the special ability to persevere. It’s easier to give up in our own strength.”

Maryanna may seem to live the proverbial charmed life – and in many ways she does – but she’s also known problems common to all humanity. She cared for her father for many years in her own home as he battled dementia; he passed away in June of 2021. She currently cares for her mother, who struggles with mobility issues due to a back condition.

When she hit a rough road in keeping Aloha Publishing flourishing, she faced daunting financial challenges. “Keeping the business rolling from 2010 to 2019 was a long process. We hung by a thread; I was paying people out of my grocery money. I call this business ‘one long decade to overnight success’. It doesn’t just come from me. I love the authors we work with and our team here at Aloha,” she said. “Once I applied the creative innovation which was the core of my coaching and sports work to the publishing industry, it’s been much more fun and meaningful.”

Her sports background made her a team player, and she is aware of the value of working with others to complete a project. She can see gifting and potential in her team and works to find the role that fits each person best. She also believes that nothing she has accomplished in life was born from her own solitary efforts. She gives God His due credit, saying, “My story is way more than I could have done on my own.”