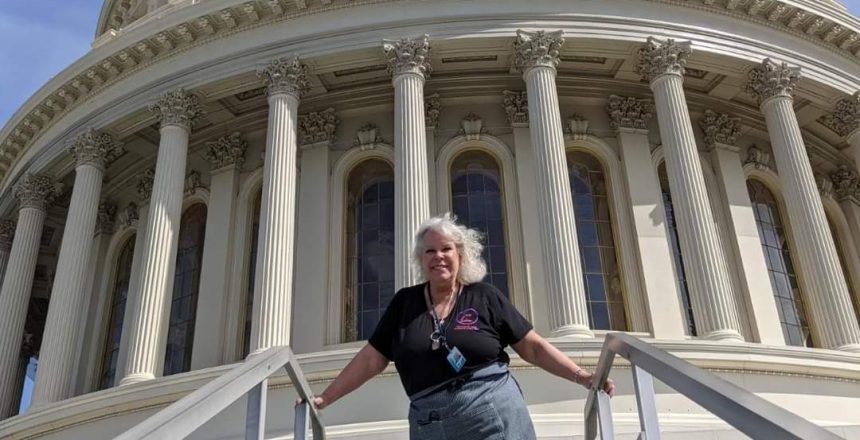 Mama Passarelli, founder of The Soup Ladies, has had her share of highlights over the years, including standing on some of the highest steps of the U.S. Capitol Building in Washington, D.C. (Photo provided by Ginger Passarelli)

On a moment’s notice, Ginger Passarelli will leave the humble Idaho town of Glenns Ferry and be off in a heartbeat to anywhere in the U.S. But she won’t be going on a sunny, restful vacation. Instead, she’ll be flying right into the middle of a crisis, and she’ll be doing it voluntarily.

Passarelli is not a policeman, nurse, or firefighter. Oddly enough, she makes soup, and that’s what she offers free-of-charge to first responders anywhere they’re called to help.

Mama Passarelli, as she’s known, serves her specialty at the scene of some pretty harrowing events: hurricanes, tornadoes, or earthquakes, to name a few. Some of the towns she rushes toward are sites of nothing less than major human tragedies, such as Uvalde, Texas, or the 2017 country music festival at the Mandalay Bay Hotel on the Las Vegas Strip.

But call Mama and she comes.

Passarelli moved to Idaho a little over a year ago with her husband Harvey. The social unrest in large metropolitan areas led them to seek residence in a quieter place away from all that. She and Harvey put offers on houses and got one in Glenns Ferry. Passarelli delivers soup on Fridays to the Elmore County Sheriff’s Office, where she also serves as chaplain. She started her current calling – both as a soup chef and a chaplain – in the state of Washington, primarily in the Seattle area. But she takes exception to the title of “chef.”

“I always say I’m not a chef. I’m a ‘mom cook’,” Passarelli explained. “I just cook a lot of my Italian family recipes – it’s home cooking.”

While still in high school, she met a group of missionaries and was impressed by the work they were doing. “They were smuggling Bibles into Russia. They were risking their lives to bring people Bibles and I thought, ‘It must be pretty important if they’re willing to risk their lives’. I spent a lot of time with them,” Passarelli said.

After graduating from high school, she moved to Portland and started going to church regularly. Later, she moved to the Evergreen State. In the late 1990s, she began attending a church in Maple Valley, Wash., when she was a single mom with two daughters and barely scraping by. She admits she was praying “woe is me” prayers to God.

One day, she explained, “I had this thought: make soup. I can be snarky, and I was a little snarky with God. I said, ‘Make soup? That’s ridiculous!’” Still, the thought persisted.

The pastor of the church she attended was named Steve, and she went to him and said, “I think I’m supposed to make soup every Sunday and bring it to the church.” The pastor’s original thought was, “What a great idea. We’ll have potlucks, and you can bring the soup.” And she countered that, no, she felt she was supposed to bring it every Sunday and serve it to the congregation. The pastor accepted Passarelli’s nudge from God, and she brought soup to church every Sunday for a year. She was given the friendly moniker “the soup lady.”

Things were going well, and the congregants loved the soup; however, Passarelli needed a bigger, better pot to make it in. “A good pot is about $100,” she said. She asked Pastor Steve to help her buy a pot and he did. After that, she made not one but two pots of soup every Sunday. She started to get the idea that, “This soup is going to be something….” The entire soup idea was beginning to gain a life of its own, and Passarelli recognized there was more behind it than soup for one church congregation, one day a week.

By then she had opened her own restaurant, which she ultimately owned for 15 years. Her eatery gained a reputation for serving all kinds of good food, not just soup. Through church and restaurant connections, a pastor was made aware of Passarelli’s skills and her generosity with culinary acumen and called her after Hurricane Katrina hit parts of the South in 2005. The hurricane devastated huge parts of Louisiana, as well as Mississippi. When the pastor got Passarelli on the phone, he cut to the chase: “Can you bring food?” Her husband nodded yes, and she was off.

It was to be her first experience serving food to first responders, and the out-of-the-blue immediacy of it required resilience and making do with whatever she could find to cook up large meals for ravenous emergency crews. When she hit the ground at the site of Katrina’s destruction, she encountered responders who were hungry, had nothing to eat and no time to stop and go get a meal elsewhere. Her immediate response was, “I need to do something about this.”

She and another woman who had traveled with her sought out pots, pans, food and everything else they needed at whatever stores they could find open. Because there was no electricity, they made soup on anything that would generate sufficient heat.

Said Passarelli: “I spent a lot of money, buying whatever we needed.” When she started to feel overwhelmed by it all, she was nonetheless told, “These people need to eat and you have to do it.” Her first thought was, “I’ve never done this in my whole life!” But God assured her He would equip her to meet the challenge.

“We cooked and cooked. I called my husband and said, ‘You better check the balance on our bank account’ because I was spending a lot of money to meet the need for food.”

The two women accomplished all they did not only without electricity but without running water. “We’d sanitize our hands with bleach, and we used Hefty Trash Bags to spread out for a sanitary surface. We flew by the seat of our pants, and we prayed hard. This was all new territory for me. But when you have hungry people in front of you, you feed them and you love on them.”

It was to be the first of many experiences meeting the needs of responders in all kinds of circumstances. Mama Passarelli became just Mama to lots of people and would eventually be accompanied by a group of women known as The Soup Ladies.

Passarelli explained: “When we cook for first responders, it’s not diet food – they don’t want salad. The meals are full of carbs and proteins. It’s hearty food that will stick to the ribs.”

The men and women on the front lines of hurricanes and other extreme weather events work hard, work long, and keep running with little downtime. Their need is for stable sustenance that enriches them and stays in their system for a long period.

Mama Passarelli is a soldier in the service of others and gets “deployed all over the country.” She fights others’ hunger and fatigue, and her battle weapons are pots and pans filled with great food and a heaping measure of comfort to go along with it.

At 68, she’s logged thousands of miles. She and The Soup Ladies are called to the scene of disaster by state and local governments. “We can’t self-deploy,” Passarelli said. “We have to wait for an invitation.”

When they are invited, it’s their goal to be out the door and on their way in an hour.

“I’ve fed many people,” Passarelli said. “Up to 3,500 people a day in Mississippi after Hurricane Katrina. In church, I fed 1,100 people. In Seattle, I fed a 1,000 people a day when first responders encountered violent protestors – and the same in Portland. I cooked near the U.S. Capitol for the Capitol Police. The Soup Ladies serve everybody.”

Does the trauma of being so near to tragedy affect her and the women of Soup Ladies? “I can’t say we’re immune. [After serving] we debrief and do follow-ups.”

They do the same for the people and responders in areas hit by great harm. They were called to the site of the El Paso Walmart shooting and, according to Passarelli, “We went back four weeks later to see how they were doing.”

Everyone involved in The Soup Ladies is highly trained. They bring their own culinary skills to the work but must receive FEMA training. Passarelli herself attended the FEMA Advanced Academy and has training in both bodily first aid and psychological first aid. At her home, she keeps an Emergency Management Institute Certificate of Completion from the National Emergency Management Advanced Academy. She attended a chaplains’ academy as well and said, “I have taken so many classes!” Eight other Soup Ladies are also chaplains and all take the same emergency training as their leader.

The Soup Ladies are a non-profit that thrives on donations. Passarelli said she handles the money “very frugally.”

The group is renowned throughout the nation. Mama has a Soup Lady truck that was gifted to her by Ford Motor Co. live on the TODAY Show, as part of its Women’s Day TODAY series. She was also surprised by the restoration of her trailer-slash-kitchen by Mike Rowe on his “Returning the Favor” webcast via Facebook.

Despite the spur-of-the-moment nature of her initial first responder meal preparation following Hurricane Katrina, she now has all preparations fully under control. Her luggage is always packed, much of her cooking equipment is transported ahead, she maintains a well-stocked freezer, and she carries duffle bags full of supplies on whatever mode of transport she’s taking.

She needs more local volunteers, mainly to help when she feeds first responders either locally or somewhere else in Idaho. In Washington State, she had 60 volunteers; currently in Idaho, she has only three volunteers. “We need way more,” she said. The Soup Ladies also perform acts of service at first responder-related events such as Stand with Those Who Serve, Shop with a Cop, and Chief for a Day – it’s not always about critical incidents. Passarelli wants to expand into Twin Falls and would like to also get to Boise as well with her special ministry.

Asked what she does to chill, the grandmother of nine replied, “For fun and to clean the cobwebs out of my head, I get in my car and drive with the top down and start blaring Frank Sinatra music.” She has a Pandora station on in her home with what she calls “Italian music to cook by.”

Mama’s journey has been amazing, and she’s well aware of that. “Who would have thought that making a pot of soup would turn into this?” she asked, just as amazed as the rest of us.

For more information, go to www.soupladies.org or visit The Soup Ladies Facebook page. To join Mama Passarelli in her work, email [email protected].