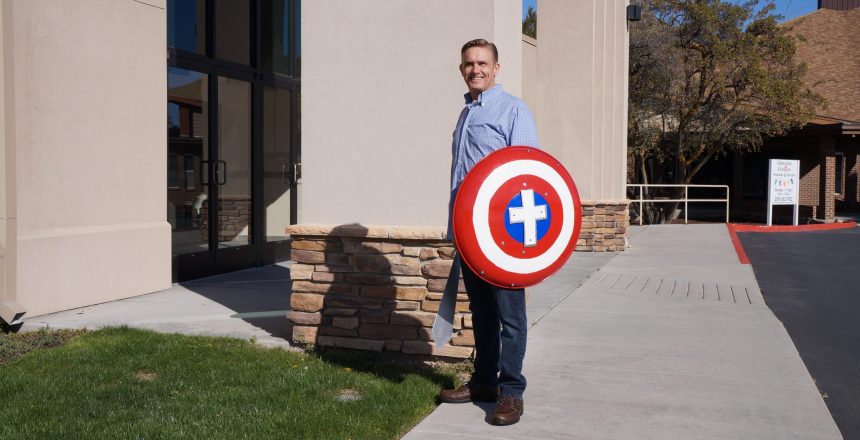 Dewey took the impact Mrs. Finkbeiner and Squeakers had on his walk with the Lord to heart,  and today, as a children’s pastor himself, he has a puppet sheep named Betty Lou, who whispers many of those same kind of profound thoughts in his ear.

Dewey has a fantastic imagination, and he’s always looking for new, innovative ways to bring the Bible to life, to get his students to fall in love with Jesus, and to whet their appetite to become lifelong readers and learners of the Word.

It’s said that you always want to make a great first impression. This article is a direct result of my first impression of Dewey more than a year and a half ago. He was new on staff at Cloverdale, and I had stopped by to visit with the church’s senior pastor, Tom Dougherty. Tom introduced us and suggested that I check out some of Dewey’s classroom aids. I instantly liked Dewey, who is gregarious, with an impish, fun-filled smile. We all know someone like Dewey — they’re the people you want to hang out with because you just know it’s gonna be fun!

Dewey led the way to his small office, where he proceeded to lay out for me his latest project, a kid-friendly version of the Armor of God, based on a Marvel character.

“Finally, my brethren, be strong in the Lord and in the power of His might. Put on the whole armor of God, that you may be able to stand against the wiles of the devil. For we do not wrestle against flesh and blood, but against principalities, against powers, against the rulers of the darkness of this age, against spiritual hosts of wickedness in the heavenly places. Therefore take up the whole armor of God, that you may be able to withstand in the evil day, and having done all, to stand. Stand therefore, having girded your waist with truth, having put on the breastplate of righteousness, and having shod your feet with the preparation of the gospel of peace; above all, taking the shield of faith with which you will be able to quench all the fiery darts of the wicked one. And take the helmet of salvation, and the sword of the Spirit, which is the word of God.” (Ephesians 6:10-17 NKJV)

Dewey explained that when Paul wrote these verses he was handcuffed in prison between two Roman soldiers and trying to describe the armor the Christian should wear; Paul found using the soldiers’ own armor to illustrate his point was his best hope of getting them to understand. Realizing that most kids today don’t know what a Roman centurion is, Dewey made a Captain America mannequin with a shield that has a cross on it instead of a star. Dewey’s students have learned about the “belt of truth” and the “helmet of salvation” by seeing them represented on Captain America. Dewey’s Captain America is also wearing boots that are fitted for the gospel of peace, and so on.

The kids are enthralled, wanting to know if they can hold the shield and touch the different pieces. Not only are they allowed to touch, hold and feel, Dewey also has costumes the kids can use to put on their own “Armor of God.” It’s a very hands-on approach to learning.

There’s also “Thor’s hammer.” On one side is written Jeremiah 23:29 NASB, “Is not My word like fire?” declares the Lord, “and like a hammer which shatters a rock?” On the other side is written Ezekiel 36:26 NIV, “I will give you a new heart and put a new spirit in you; I will remove from you your heart of stone and give you a heart of flesh.”

“Kids know Thor, and they know his hammer, but do they know it spiritually? God’s Word is this hammer that breaks our stony heart so that God can give us a heart of flesh,” Dewey explained.

There is nothing boring about Dewey’s program. He refers to his main classroom as the Almighty Stadium, a play on Albertson’s Stadium at Boise State University, but in his classroom it’s the Bible Student University, complete with blue turf he occasionally rolls out. The walls are lined with pictures of people of all ages cheering the kids on as Dewey shares with them that we are all competitors, running the good race to win the prize.

Dewey works hard to spark his students’ imagination. A few weeks back they were studying in the book of Job, chapters 41 and 42. The kids were stunned when Dewey asked them, “Do you know there are dinosaurs in the Bible?” Dewey went on to explain, “Yeah, God is talking to Job, and he describes this brontosaurus with a big long tail that sways like a tree. And in the next chapter talks about this animal that fire comes out of his mouth and smoke rises from his nostrils.”

A self-proclaimed Sunday school kid growing up, Dewey’s family was often the first to arrive at their church, Ontario First Church of the Nazarene, on Sunday mornings and the last to leave.

As a youngster, Dewey had heard the David and Goliath story told in his Sunday school classes. “I love the story of David. He is my hero. David had his ups and downs. He was a warrior. He cried. He played an instrument. He was a shepherd. I just love the whole story,” Dewey shared.

“It’s interesting when you read the Bible how things jump out at you, and it’s like, whoa, there’s more to it. So David hits Goliath and he falls. David ran to Goliath, took his sword and cut off Goliath’s head. When I read that, I thought, ‘My teachers didn’t tell me this part!’” he said, reliving the memory of his fifth or sixth grade self.

He continued, “But when I read that I’m like, oh what other stories in the Bible am I missing out on? What other things may I only be catching a little bit?”

Dewey’s enthusiasm is contagious — and his students all get it! His amazing team of helpers and teachers get it!

Dewey encourages his Sunday school teachers to sit one, serve one, asking them to come on Sunday mornings and sit with their spouse through one of the church services and serve through teaching the other service. (Cloverdale has services at 9:30 a.m. and 11 a.m. every Sunday morning when the community is not under a “stay-home” directive.)

When asked what impact he hopes his ministry might have, Dewey enthusiastically repeats that he hopes his students learn to love reading the Bible from him, and the importance of prayer.  As we were winding up our time together, he asked that we share this message from him to you, our readers: “If you’re reading this, please pray not only for this children’s ministry but for our pastor, Pastor Tom; pray for other churches, pray for your church, pray for your pastors, pray for them that they can hear the Word of God and that they can deliver the message; pray that the hearts of people who come, regardless of age, that their hearts and minds will be open to hear the transformation, the Word of God and let it sink in.”

Wouldn’t it be great to talk to one of Dewey’s students in 50 years to hear how they remember the impact Dewey has had on their walk with the Lord?

Pastor Dewey Alger may be reached at [email protected].