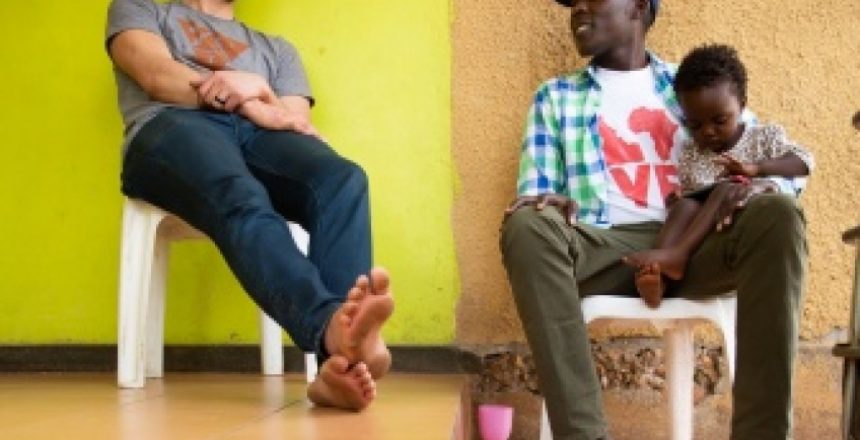 Andrew Green of Boise, left, sits with Robert Tumwesigye of Uganda. Robert is holding a little girl that he and his wife Millie took into their home to save her from a life of child labor. (Photo by DJ Ramirez)

Dreams spur the goals, wishes and hopes humans have for their lives. When people are not able to dream, they miss out on a vision-filled future. Andrew Green wanted to help people dream, to allow them to explore what might be possible for them during their days on Earth. To that end, he started a nonprofit he named Ruja, which means “to dream” in the language of Uganda.

Andrew’s work history includes times as a youth pastor and as a teacher at a Christian school. But while he was involved in full-time ministry, he says now that back in those days, “I was not following Jesus.”

It was an inspired reading of Isaiah 58 one day that awakened him to what he needed to do. Verses like the one below moved him.

“Is not this the kind of fasting I have chosen: to loose the chains of injustice and untie the cords of the yoke, to set the oppressed free and break every yoke? Is it not to share your food with the hungry and to provide the poor wanderer with shelter—when you see the naked, to clothe them?” — Isaiah 58:6

“That motivated me to take a leap outside of my bubble,” he said.

He admits he didn’t entirely know what he was doing; it was all something of a blind jump into action, but with a deep sense that he would serve the poor and oppressed, as he had read in the Word. He had been reading other books, like “Love Does” by Bob Goff, and there were mentions of Uganda in the books. He made the decision to do something for Uganda and started a fundraiser to help raise money for a trip there.

“It was a crazy experience,” he said.

He needed money for an airplane ticket to Africa in the amount of $1,000, but his fundraising efforts fell short. Getting creative, he decided to try busking on a street corner in downtown Boise. In typical busker fashion, he opened his guitar case, took out the instrument, and left the case open for people to throw in money as he sang and strummed. He’d barely begun when a man on a bike rode up to him and started a conversation. He asked Andrew why he was standing on the corner trying to raise money and what his goals were; Andrew explained his plans were to help people. The man said, “Follow me to my office.”

The man’s name was Joe Kosakowski, founder and CEO of Quest Groups and himself a Christian. Andrew’s busking endeavor was over almost as soon as it had begun. “Joe wrote me a check for a thousand dollars,” Andrew said. The encounter not only sealed Andrew’s plans for a trip to Uganda, it altered how he experienced God in his life. “That forever changed the way I viewed how God works,” he said.

It wasn’t just a check; it was three things in all: money, a miracle, and a message that God was with him. “A lot of people — friends and family — were telling me not to go, for safety and other reasons, but that meeting with Joe was a sign,” Andrew said.

In 2013, with the help of some acquaintances from Youth with a Mission, Andrew flew to Uganda in eastern Africa. He worked with children with AIDS. “I was changing diapers and feeding babies,” he said.

He admits now he really had no clue what he would experience in Uganda, nor how he would ultimately formulate his plans to help people there. For his first two weeks in the country, he continued helping kids with AIDS. Following that, he stayed at the home of a Ugandan couple, Robert and Milly Tumwesigye. “They were living by faith that I needed to see,” Andrew said.

In their 20s at the time, Robert and Milly were demonstrating a faith that Andrew just had to witness for himself. They had sacrificed paying jobs and were living fully dependent on God, certain that’s what He wanted them to do. They had moved to Fort Portal, Uganda and taken in two kids who had been victims of child labor. Unbelievably, the children’s ages were 5 and 2. The 5-year-old had been made to carry water all day, while the 2-year-old’s tiny stomach was bloated for lack of food. Robert and Milly never wavered in their faith in God, that He would provide for them and the children.

“I was overwhelmed by that,” Andrew said. “Robert and Milly did not have enough money to pay their own rent, but they took the children into their home, taking care of them and loving them. It was so moving to see this — their hospitality in the midst of their poverty. It was really beautiful.”

Following that, Andrew returned to the U.S., to the land of plenty. He was changed when he came home. “I was very, very cynical. You talk about culture shock going to Uganda — I was in reverse culture shock coming back here,” he said.

He’d seen kids that were going to die of malaria because they couldn’t afford the $8 medication they needed to save their lives. Because of this, he admits he felt “bitterness” when he returned home and saw people who really had no idea how great their lives actually were, how genuinely small their problems compared to what he’d seen in Uganda. “It took me about a year to work through it,” he said.

He launched Ruja in 2014. In the beginnings of Ruja (now a 501(c)(3) nonprofit), he struggled to pay the bills, to keep the lights on. “Money was tight,” he said. But he continued to experience more miracles like they one he’d had busking. “Things like that have happened repeatedly since then.”

At one point, Andrew got out a 1950s Singer sewing machine that he had put in his closet; he’d bought it at an estate sale, intending to re-sell it and make some money. But instead, he decided he’d teach himself to sew — he’d use the old Singer to sew backpacks to sell. He’d returned from Africa with a sugar bag that had a lion on it. The bag was not made of burlap, but the material was strong enough to make a useful backpack out of.

His plan was to live simply and start his backpack business. “I’d make money as I figured out my life. A couple of weeks later, God kind of switched on the lights for me and said, ‘Why don’t you use this (the backpack project) to make money for the people you’ve just seen?’”

Andrew hurled himself into sewing. “The first backpack I made was horrible, but I thought it was cool. I wore it everywhere,” he said.

To expand the business, he went to local coffee roasters, such as Dawson Taylor and the Roastere’, and got burlap sacks; the local businessmen were willing to give him the sacks, as they were just going to discard them otherwise. He started selling his backpacks online and at The District Coffee House in Boise.

He called Robert and Milly by phone and told them, “’I love what you’re doing and feel God wants me to be a part of it.’ I wanted to help with the vision and the resources, so they could take more kids into their home.”

It has been a perfect partnership. There are now 10 children in Robert and Milly’s house. “We create an environment that’s like family,” Andrew said.

The kids they take in are dealing with many things, including having missed many years of school. One young woman, now a midwife, had been 17 when Robert and Milly took her in; she had been living on the streets alone, and to survive she had turned to prostitution. Another girl had failed the 7th grade twice. The school had written her off. Robert and Milly, with help from Ruja, took her in and put her in another school, where she became an exemplary student. She’s preparing to be a lawyer. “She’s well on her way to proving all doubters wrong,” Andrew said.

A young boy of 13 wants to be a doctor and has set his sights on building two hospitals — one in a thriving metropolitan area and another in a poor rural site, with the thriving hospital helping support the poorer one. “He’s just 13,” said Andrew. “When I was 13, I was playing video games!”

The children dream. Now, with the help of Ruja, they are working to achieve their dreams. He stresses that when he seeks donations to help them, he doesn’t do it through pity. “We don’t want to tug on heartstrings with sad stories, and guilt people into giving. We want to inspire people to see what’s possible, because each of these kids is created in the image of God and has the ability to ideate, create and dream,” he said. “Many people think people in Africa are always going to be poor, they’re always going to need help.”

But they have dreams, he insists, dreams that are squelched and stolen by poverty.

“Poverty deprives them of dreams. It keeps people locked into survival and putting food on the table,” he said.

Poverty deprives them of the freedom and ability to think forward, he explained, to see themselves in the future, doing something meaningful, because they’re trapped in the day-to-day struggle of just barely getting by. “When these people receive help, it loosens the bonds of poverty. The brain re-wires itself, allowing it to think about the future.”

They are now free to think about saving money, planting crops, setting goals — and having dreams.

“We renew them and remove that yoke of poverty and fill that space with love and a new vision of who they are and who they can become,” Andrew said. “All of that is biblical; all of that is rooted in the idea that all people are created in God’s image. God loves these kids.”

Andrew, who is now 31, was raised in a Christian home in Florida and went to Maranatha Baptist University in Wisconsin. He married a dietitian late in 2018 and said of his new marriage, “I’m a rookie.”

He quit the backpack sewing business years ago and now does all his fundraising through Ruja, while working different jobs to make money to support himself and make a home for him and his bride. He visits Africa twice a year and sends funds to Robert and Milly regularly. “We are committed to seeing these kids dream big, and to seeing the Kingdom of God take root in Africa.”

Dreams matter so much to him — the dreams of children and adults in the challenging environment that is Uganda. He himself is a big dreamer. “My wife has to pull the reins back every once in a while,” he said, laughing and feeling like a man whose dreams are succeeding, and will only get bigger.

For more information, go to ruja.org. The nonprofit is also currently doing more work beyond just caring for kids. It is now involved in starting up community development initiatives around agriculture and education.